Wisterias (Wisteria spp.) are large deciduous vines with spectacular drooping flower clusters. They can overwhelm fences, trees, even entire houses, but with the right support structure and regular pruning they cause no harm and are one of the most elegant and long-lived flowering vines. 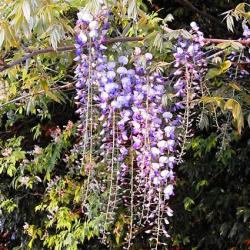 Wisteria blooms with dangling flower clusters up to three feet long that emerge in early spring, just before or as the leaves appear. The flowers are usually purple though white and pink forms are also available. The leaves have a simple oval shape and are about one and a half inches long. The six-inch seedpods that follow the flowers are also quite spectacular, filled with plump inedible beans and covered in a velvety fuzz.

The vines grow up to 50 feet if their growth is left unchecked, but can be maintained at any height desired with annual pruning. They become woody and gnarled with age, weighing hundreds of pounds.

Wisteria flowers best in a location with full sun and relatively poor, infertile soil. It needs good drainage and is a great performer in dry, rocky places. It will need irrigation for the first year or two to get established, but afterwards requires water only during severe droughts.

Its main growing requirement is a sturdy support structure. Many arbors, fences and trellises are insufficient - wisteria should be trained on something with 4 x 4 posts (or preferably, 6 x 6) set in two feet of concrete.

The classic use of wisteria is to cover large garden pergolas. Fences and arbors, if sufficiently reinforced, are also great places to plant a wisteria vine. They can also be trained along the eaves of the house, gazebo or a covered porch using large metal hooks to support the landscaping vines.

Growing and Caring for Wisteria

Wisteria can be planted almost any time of year that the ground isn't frozen. It is an extremely tough plant that requires little care and attention and is not bothered by pests or disease. The primary maintenance required is not about encouraging its growth, so much as limiting it. 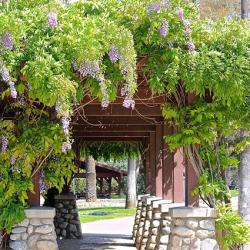 With a sufficient size structure to grow on it's possible to enjoy wisteria without ever pruning it, but most gardeners will want to prune their wisteria annually to maintain its size, as well as to stimulate maximum flowering.

Winter is the best time to prune. The goal is to develop primary branches (scaffold vines) that are trained along the main support structure with short flowering spurs (lateral vines) that are renewed each year with pruning.

Wisteria is invasive in some areas. Seedlings may pop up where they are not desired, especially in wooded areas. Vines may also emerge from the roots away from the main plant - these should be removed with a shovel. You can check with your local cooperative extension service office to find out if wisteria is invasive in your area.

Also, be careful when training wisteria onto a structure with siding, as the young vines will work their way under the siding and slowly lift it. This is easily prevented with annual pruning however.

All parts of the wisteria plant are poisonous to people and pets though a large quantity has to be consumed to cause any serious medical problems.

Wisteria is among the most commonly available flowering vines in nurseries. There are two main species of wisteria and many cultivars. 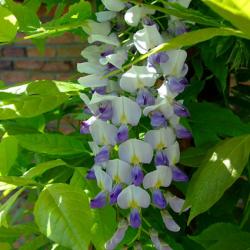 Japanese wisteria blooms slightly (Wisteria floribunda) later as the leaves are emerging and is the most fragrant type. All varieties hardy in USDA zones 5-9.

Wisteria is the essence of strength combined with delicate grace. Consider the planting location wisely to prevent big maintenance problems in the future and plan on enjoying the fragrant blossoms each spring for as long as you live.