Windflowers (Anemone spp.) are a group of perennials with colorful poppy-like flowers that flutter in the breeze. There are several distinct forms for gardeners to become familiar with, all of which are very effective when planted in mass. 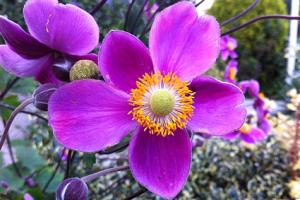 Windflowers grow underground from tubers or rhizomes to form small colonies. Depending on the variety, the flower stalks grow from six inches tall to nearly six feet. Flower color varies widely, but the blossoms are generally two to three inches in diameter with thin, delicate petals. The deeply divided foliage is dark green and clustered near the base of the plants.

All parts of windflower are toxic. One would have to eat a large quantity to be in real danger, but even a small quantity will cause severe, but temporary, pain in the mouth. Significant exposure to the sap of the plants can cause dermatitis, so it's best to wear gloves and protective clothing when working with windflower.

Windflowers grow best in partial shade. In cooler climates they can tolerate full sun, but in hot climates, it's best if they are sheltered from the late afternoon sun.

These are largely woodland plants, meaning they appreciate rich soil that is high in organic matter. Plant on a mound if drainage is poor and amend the planting area with compost before putting windflowers in the ground.

Windflowers are susceptible to a number of pests and disease though they are rarely fatal. Since the plants grow from extensive underground root systems, often the best solution is to cut the stalks to the ground and let them re-grow in hopes that the pest will have moved on.

Slugs and snails like to feed on windflower leaves. These are best controlled with commercial deterrent, such as Sluggo.

Nematodes are perhaps the most serious pest of windflowers. These are tiny underground creatures that burrow into the roots and can slowly weaken a plant if they are allowed to build up in the soil. If your windflower is looking weak and the leaves are starting to yellow, try drenching the soil with a nematocide.

Windflowers are widely available in nurseries with the perennials. Look for some of the following types.

Windflowers flutter their petals in the wind and bob gently in the breeze, giving a serene feeling to garden spaces. They are an important member of the perennial garden palette, offering many colors and forms to choose from.