Vetches are leguminous plants that have a long history in agriculture. The name refers the dozens of species in the genus Vicia although it has sometimes been used in the common names of other pea family plants. In common usage today, however, the name vetch refers to a few species that are used by gardeners to enrich their soil and provide habitat for beneficial insects. 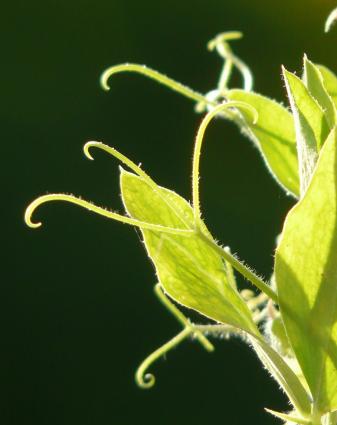 Vetches are vine-like annuals and perennials. They sometimes scramble a few feet up into shrubbery, but are more often seen rambling across the ground out in the open. Though they have tendrils and flexible stems, they grow more like a fluffy mass of foliage, rather than a typical vine that you would train up a trellis.

There are many species of vetch but only the hairy vetch and common vetch are commonly available to gardeners. They both have ferny foliage reminiscent of sweet peas with purple flowers that give way to small seed pods that look just like pea pods; however, they are non-edible. The main difference between the two species is size: hairy vetch grows as a sprawling mass about knee high, while common vetch can get waist high.

Like most legumes, vetches have the wonderful ability to produce their own nitrogen, a trait that farmers and gardeners long ago learned to harness as a form of all natural fertilizer for other plants. The technique involves planting these as cover crops in the season before the desired crop plant is sown. That way, the nitrogen deposited in the soil will be immediately available to the new seedlings.

The nitrogen is not produced by the vetch plant alone, but is the result of a symbiotic relationship between the bacteria called Rhizobium which colonizes the roots of the plants and converts gaseous nitrogen from the air into a water soluble form that plants can make us of. Cover cropping is by far the most common use of vetch by gardeners although it does offer outstanding ornamental qualities.

Using Vetch in the Landscape 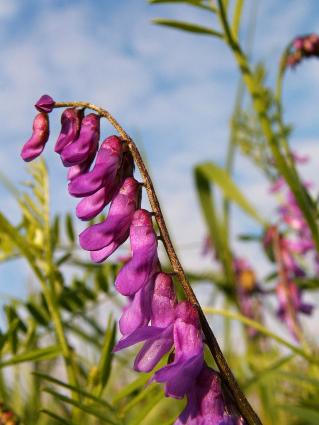 The prolific purple flowers and lush foliage of vetch make it attractive for use in the landscape. As an ornamental, it is used with wildflowers in naturalized meadow environments, but is not typically used in conventional landscape settings, as it's rather coarse and untamed when viewed from close up and has an unruly growth habit.

However, the drifts of purple blossoms floating above the vegetation is very effective viewed from afar in mass plantings in conjunction with ornamental grasses and wildflowers like coneflower, daisies, poppies, milkweed and yarrow. Vetch is known for attracting butterflies and a host of other beneficial insects that prey on various insect pests, making it a favorite for habitat gardens and wildlife plantings. It can also be incorporated in seed mixtures used for erosion control purposes.

The plant is almost never grown by itself. For soil improvement purposes vetch seed is typically mixed with a grain, such as rye or oats, and sometimes with fava beans. For ornamental purposes, mix it with any type of wildflower seed for sunny locations. The seed mix should be raked lightly into the surface of soil that has been worked to a loose crumbly texture prior to planting.

For maximum nitrogen production, vetch seed should be inoculated with the proper bacteria. It is possible to buy pre-inoculated seed or purchase the correct inoculator - it should be labeled for vetch, rather than clover or some other legume. Simply mix the seed and powdered inoculator in a bowl moistened with water prior to planting. 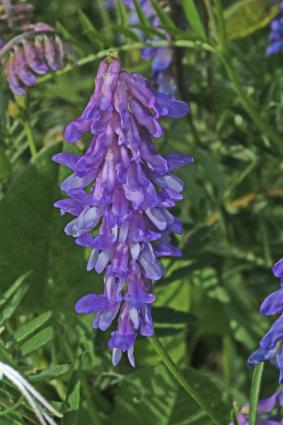 Since vetch is typically used in a naturalized setting, it's fine to scatter the seed and wait for rain to come and cause it to germinate. For more immediate germination, the planting area should be kept moist with a sprinkler until the seeds sprout. Then forego irrigation unless the top inch of soil dries out completely. Because vetch likes to grow during the cool times of year, regular irrigation is rarely necessary. Vetch seeds itself prolifically so it is not necessary to replant - it will come back year after year on its own.

Various insects and pathogens occasionally attack vetch, but they are rarely a problem for gardeners. The plant is almost entirely self-sufficient which is why it is so useful in semi-natural settings.

A Plant Full of Life

Poor growth is not an issue with vetch, so much as excess growth: vetch is considered a weed where it is not planted intentionally. It does not have highly invasive characteristics, however, and if it does show up where you don't want it, it's an easy plant to pull.