There are so many types of butterflies that it takes a book to list them all. Butterflies and moths together make up an order of insects called Lepidoptera. This group contains over 180,000 known species!

North America is a temperate area and many species of butterflies find a home here. Approximately 700 species can be found north of the border of Mexico. The major butterfly families that are found in North America are:

While, scientifically, butterflies are categorized into species and families, they can also be separated into habitats. Each habitat offers unique sources of camouflage and nutrition to the butterfly. Each type of eco-system has different butterflies that thrive there.

Woodland butterflies are often less colorful than the butterflies of the grasslands. Because of the large variety of food sources, there are more types of butterflies found in this habitat than in any other.

Short summers and cold nights make a hostile environment for butterflies. In spite of these challenges, there are a large variety of butterflies that are at home in the mountains and even the arctic tundra. These butterflies are often darker in color, allowing them to absorb the heat from the weak arctic sun more easily. Long, hairy scales cover their bodies and help to retain the heat.Mountain Butterflies 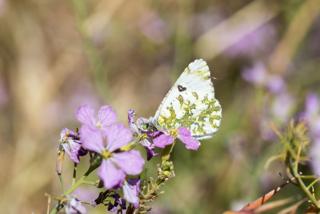 There are several butterfly species that prefer living along salt marshes, canals, and coastal regions in North America. Some of these include:

Of course the most marvelously patterned butterflies are from the tropics. These brightly colored butterflies live in the tropical areas of the world near the equator. They are extravagantly decorated with colors like pink, bright green, and purple. Because of the favorable living conditions, the tropical butterflies tend to be larger than other types. 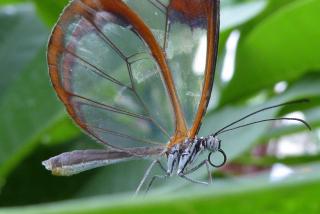 Butterflies are dependent on plants and habitat for survival. In recent times, some of the changes that man has made to his environment have put some of these beautiful creatures at risk. For example, a Californian Xerces Blue was last seen near San Francisco in 1941 and is presumed extinct. As long ago is the 1800's, the Large Copper butterfly became extinct in Britain. Once a butterfly is extinct, there is no way to get it back. Its beauty and place in the environment is lost forever.

Some types of butterflies that are on the endangered species list are:

Other Sites of Interest

There are several interesting sites about butterflies that can help you learn about butterflies. Butterfly information, clubs, cams, and pictures abound on the internet. If you are a teacher, there are many sites with printables and teacher's helps as well.

Comments
© 2006-2021 LoveToKnow, Corp., except where otherwise noted. All Rights Reserved.
Types of Butterflies With Descriptions and Pictures