The common tansy (Tanacetum vulgare) is a perennial with emerald-green, fern-like leaves and bright yellow button shapes flowers. Tansy is often classified as an herb, but it grows very easily and can be highly invasive plant.

Is Tansy an Herb or Weed?

Tansy was considered a usable herb in ancient times, but in the modern world, its status is little more than a weed. In fact, it is considered a nuisance thanks to its invasive tendencies to crowd out natural indigenous plant life. Unless you have a very compelling reason to grow tansy, chances are you're better off bypassing this one. This invasive and toxic plant has made the noxious weed list in many states.

Many states in the United States classify tansy as a noxious weed. In fact, the Washington State Noxious Weed Control Board (NWCB) lists common tansy as a Class C noxious weed and tansy ragwort a Class B noxious weed. Both are considered highly aggressive and harmful to the local ecosystems. Cattle and horses grazing on either plant can suffer irreversible liver damage although the animals rarely eat common tansy. 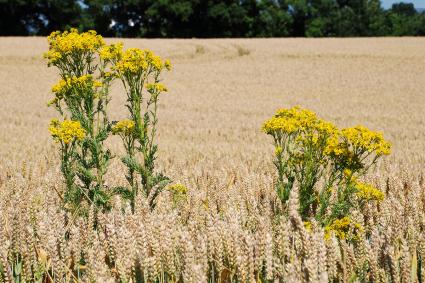 How to Combat Invasive Tansy

Tansy grows wild and can take over a field. You can find it growing along the road, in pastures/meadows or even in yards. The control techniques include:

Tansy shouldn't be ingested since it can be toxic. In fact, medieval midwifes administered tansy tea to women desiring an abortion. Tansy ragwort is poisonous to humans and most pets, especially cats.

Common tansy is easy to identify. Its yellow button flowers grow in clusters on straight stems that can range from three to four feet tall. The flower diameter is between ¼" to ½". 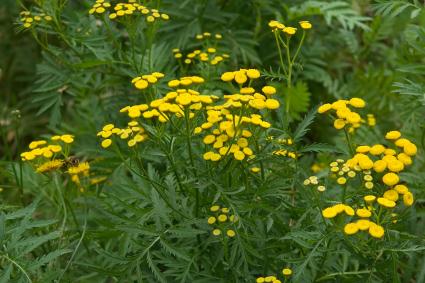 Tansy was introduced to America by European settlers when it was still used for medicinal and religious purpose, such as Easter. The button flowers were often used as decorative landscaping plants and quickly became naturalized.

Self-seeding, tansy is a prolific reproducer. The ability to self-seed allows the plant to spread rapidly. Although it also grows from rhizomes, the process if much slower. Rhizomes grow underground horizontally from the stem with lateral shoots. This makes the tansy formidable against drought and control.

Tansy is a natural insect repellent. It will repel flies as well as mosquitos. Since it is so highly invasive, you can use it as an insect repellent by placing plants in a container.

The word tansy comes from the Greek word athanatos that means immortal and referred to the long life cycle of the plant. It's ironic meaning since tansy can be toxic.

Tansy was once an esteemed herb among ancient Greeks and retained its status for centuries. The tansy's fern-like leaves were ideal as bookmarks for Bibles. In fact, this kind of bookmarker was called Bible Leaf. The herb scent often compared to mint would release whenever the Bible was opened. The Greeks preserved bodies for burial by wrapping the corpse with tansy leaves.

During medieval times, tansy was the go-to herb for ridding the body of worms. It also used as a digestive aid. Additionally, meat was covered with tansy leaves to repel insects. Do not follow those practices today due to the toxicity of the plant. Tansy was one of the herbs strewn on medieval castle floors as well as homes, so the scent would be released whenever walked on.

Tansy is used in Ayurvedic medicine for a wide range of ailments and conditions. For example, it can be added to distilled water to cleanse skin and used to kill lice, scabies, and fleas.

Borichia frutescens is a seaside tansy. This perennial shrub can grow up to three feet tall. The leaves are semi-green ovals and the flowers resemble yellow daisies. Camissonia boothii (Dougl. ex Lehm) is known as Raven - Booth's evening-primrose. This annual plant has white flowers.

Some gardeners use tansy plants to repel insects. If you decide to plant tansy for this reason or around a patio, it's best to plant in pots or containers, so you can better control it.

Comments
© 2006-2021 LoveToKnow, Corp., except where otherwise noted. All Rights Reserved.
Tansy: An Invasive and Toxic Plant