Sumac is the common name for about 250 species in the genus Rhus. These woody shrubs are found in warm regions throughout the world. Several species are grown as ornamental shrubs in Europe and North America. 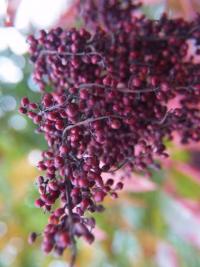 Most sumac have pinnately compound leaves. The flowers cluster in panicles or spikes and are usually cream-colored, greenish, or red. The fruit is red or reddish. Many sumac species are large shrubs or small trees, growing up to 30 feet tall, but cultivated species and varieties are usually smaller.

Rhus glabra is an open-growing shrub that seldom reaches 15 feet tall. The leaves are alternate and compound; they can have 11 to 31 leaflets. The leaflets have serrated edges.

Fall foliage is bright red. The flowers are green panicles that produce crimson berries. The berries usually remain on the bush all winter.

Rhus typhina can grow up to 30 feet tall, although cultivars developed for use as ornamental shrubs are usually smaller. It has alternate, pinnately compound leaves made up of nine to 31 leaflets. The stems are covered with rust-colored hairs.

Fall foliage is a brilliant red. The fruit appears in the fall, in conical clusters of small red drupes.

Rhus integrifolia is native to a relatively small area of southwestern California. The evergreen leaves are simple and have a leathery texture. The small white or pink flowers appear in clusters. The fruit is reddish in color, covered with hairs, and sticky.

Poison sumac (Toxicodendron vernix, formerly known as Rhus vernix) is a highly toxic shrub that grows to 10 feet tall. The leaves are pinnate with seven to 13 leaflets. The veins leading to the leaflets are always red. The fruit is a small gray or white berry produced in panicles (unlike the red berries of true sumacs). It grows in very wet or flooded soils such as peat bogs or swamps. Poison sumac is closely related to poison ivy {Toxicodendron radicans} and poison oak (Toxicodendron diversilobum). Japanese Lacquer Tree {Toxicodendron vernicifluum}is another closely-related species. These plants were once categorized as members of the genus Rhus but have been moved to the genus Toxicodendron. The name means "poisonous tree".

Sumac grow readily from seeds, which are spread by birds and other animals. They also form new spouts from rhizomes, so they often establish colonies. Be careful where you place these shrubs; they can take over a whole section of the garden quite easily.

In many Middle Eastern countries, the hairy covering of the fruits found on sumac species native to those areas is harvested and used as a spice.Native Americans used Rhus integrifolia to make a beverage, sometimes called "Indian lemonade". Other sumac species native to North America, such as the smooth sumac {Rhus glabra} and the staghorn sumac {Rhus typhina}, were also used for this purpose.

Native Americans also combined the leaves and berries of the smooth and staghorn sumacs with tobacco for traditional smoking mixtures.

The leaves of some sumac species contain tannin, a substance used in preparing leather. Leather tanned with sumac is very pale, almost white.