Rose mallow (Hibiscus moscheutos) is a large, fast-growing, cold hardy relative of hibiscus native to swamps and wetlands in the southeastern United States. Its enormous flowers and showy foliage are an asset to perennial borders in many parts of the country. 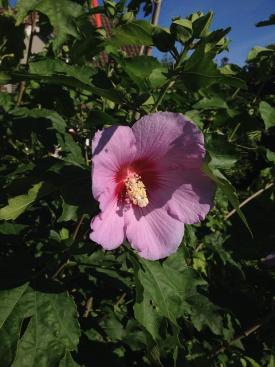 This species of mallow, also known as swamp hibiscus, has become increasingly popular in recent years as a native alternative to the tropical hibiscus. Though it is found in wet soils in nature it grows quite well in ordinary garden soil as long as it has regular irrigation.

The plants grow several inches a day until spreading their flowers in late summer at a height of six to eight feet though there are dwarf varieties available as well.

Rose mallow grows in USDA zones 4-9 and prefers full sun and rich, moist soil. Long, hot summers are needed to get the plants to the flowering stage, making rose mallow unsuitable for high elevation areas, the Pacific Northwest and the cool coastal areas of California. It is one of the top perennials for the Deep South, however, where it thrives in the high humidity.

They are in the South and to a lesser extent throughout the eastern half of the country where they are best adapted. They can be purchased online if you don't find them in local nurseries. 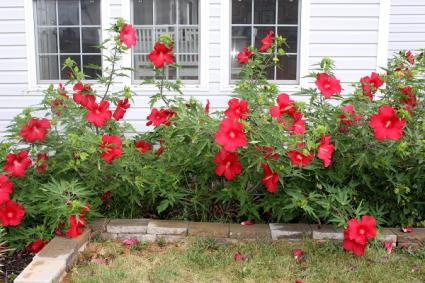 Rose mallow is very tall and narrow, making it a good choice for narrow beds against a fence or wall. It is also used in the back of a perennial border where it can rise up and put on its show in late summer when most other perennial flowers are fading.

Since it grows well in constantly saturated soil, rose mallow is a good option for landscaping wet parts of the yard. Incorporate it in bog gardens, water features, and native wetland plantings.

The smaller varieties are suitable for growing in containers, but keep in mind that the plants are dormant in the winter months.

Staking is often necessary to keep the top heavy plants from flopping over when they are in bloom. The aboveground portions of the plant will turn brown after the first frost and can be cut to the ground. Otherwise, this is an easy care perennial that does not require any type of special maintenance.

Rose mallow is generally disease-resistant, but is susceptible to aphids, scale, whiteflies, mites and other host of other insects - especially the cultivars with the largest flowers. Control these with applications of insecticidal soap, neem oil or a chemical insecticide as needed.

Plant height, flower size, and color are the main variables when choosing a rose mallow cultivar. All are hardy in USDA zones 4 to 9. 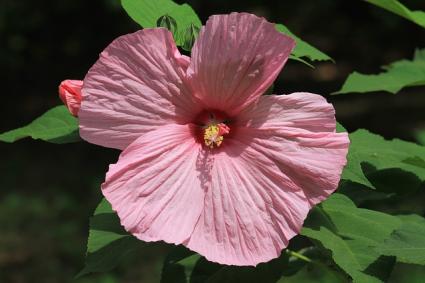 These types of hardy hibiscus make an exotic display in places as far north as Maine and Michigan. They are an important source of nectar for native butterflies and will grow in a variety of garden settings whether a high profile flower border or a half-wild swamp garden.