Pussy willow is the common name used to identify willows that bare soft fuzzy buds or catkins on leafless twigs in late winter or very early spring. It belongs to the Salicaceae family. These willows are favored for their beautiful shimmering catkins and their very early spring bloom, as well as their ornamental use.

Where to Get Your Plants

Pussy willows can be purchased from most greenhouses or garden centers in pots. While growing them from seed is possible, it can be difficult.

They can also be grown by taking a cutting and placing it in a vase with water. The cutting will rapidly form roots and be ready to be transplanted to a pot. Use a high-quality potting mix and keep the soil moist. Transfer the potted cutting outdoors and allow it to harden off in a protected area before transplanting it into the ground. Add a generous amount of peat moss or well-aged manure to the planting hole. Plant them in full sun and, as with many species of willow, provide plenty of water.

Pruning a pussy willow will keep growth in check and allow you to shape the tree. The optimal time to prune is when the catkins are fading. Some people will severely cut the shrub back to 12 inches from the ground. This type of pruning is known as coppice pruning. Coppice pruning is often done to promote long and straight branches with a proliferation of catkins. Selective trimming is done to shape and clean up the shrub. Dead branches should be cleared out, and any stray branches that are disrupting the overall shape of the bush can also be removed. 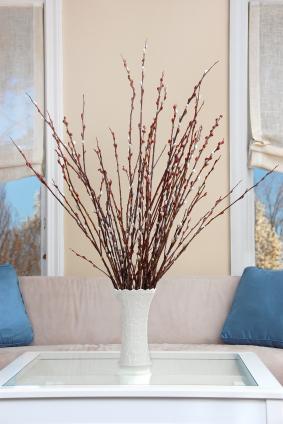 Pussy willows are grown ornamentally for their beautiful catkins. They can be grown as specimens, informal hedges, or part of a shrub border. Some gardeners grow them for cuttings. These willows force easily, creating a little spring indoors in the middle of winter. Wait until several days of freezing weather have passed and then cut a few branches and bring them indoors. Put them in tepid water, and keep them in a dimly lit place until they bloom.

Preserve the willows for use in dried flower arrangements. Just cut them after the catkins have appeared and put them in a dry vase. The catkins will dry slowly and remain beautiful for months.

Salix caprea is native to Eurasia and is a pussy willow tree that thrives in zones 4 through 8 and reaches 25 feet at maturity, although it can be trimmed to a shorter height for a hedge. This species blooms from March through April. Male trees bloom green and female trees bloom pinkish gray. Salix caprea is also known as goat willow.

Salix discolor is native to North America and is considered a pussy willow shrub that thrives in zone 4 through 8 and reaches 6 to 15 feet at maturity. Typically found growing in moist soils along the banks of streams and rivers, this species of pussy willow can also tolerate drier soil. Male shrubs produce a vibrant display of catkins that are very silky and pearl gray in color. Female trees produce catkins but they are smaller and less attractive than the males bloom. The catkins on both the male and female shrub are smaller than those found on the Salix caprea.

Pussy willows are prone to a number of blights and other diseases such as leaf spots, powdery mildew and cankers. A number of insects enjoy munching on the bark and leaves including aphids, borers, lace bugs and caterpillars. The wood tends to be rather weak and is susceptible to high winds and ice damage.

Both Salix caprea and Salix discolor provide great interest to a late winter early spring garden. Whether you use pussy willows as attractive deciduous shrubs or as a specimen trees, they are a worthwhile investment and provide early season interest in the landscape.