Poison ivy can invade yards and garden if left unchecked. Most people suffer allergic reactions from the oils the plant emits developing an itchy and painful rash. You need to be able to identify this invasive plant and learn how to get it under control.

Poison ivy is formally known as Toxicodendron radicans, although was once called Rhus toxicodendron. It is native to the eastern United States. Poison ivy leaves can be toothed or smooth, but they always appear in clusters of three leaflets. 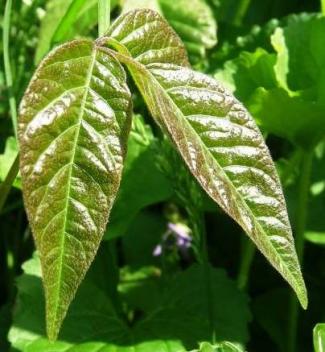 Poison ivy typically grows as a vine, hence its common name. It can also grow as a ground cover or shrub. It is often confused with Virginia creeper (Parthenocissus quinquefolia), which has similarly shaped leaves that appear in clusters of five.

Poison ivy is often confused with poison oak. Poison oak, or Toxicodendron diversilobum, is native to the western areas of North America. However, poison oak leaves are very similar to oak leaves. You can identify poison oak the same way you can with poison ivy, since the leaves grow in clusters of three. Poison oak grows as a deciduous shrub, but can also appear as a vine. 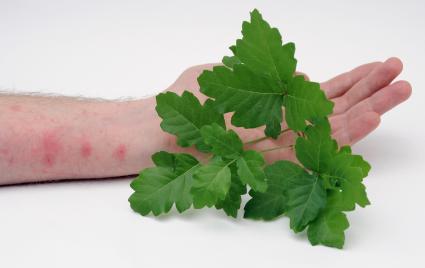 Many people assume poison ivy is only present in the country. However, birds carry the seeds great distances, and the plant thrives in disturbed soil. It is just as likely to be found hiding in a city hedge or on an empty lot as deep in the forest. Research conducted at Duke University indicates that poison ivy grows more vigorously in the presence of carbon dioxide, so it is likely to flourish in urban air pollution.

Freshly cut stems, roots, leaves, and flowers of poison ivy display a sticky, resinous sap called urushiol that oxidizes into a shiny black lacquer. Urushiol causes allergic contact dermatitis in humans. Urushiol is found in the resin canals of the plant, making it easy to make skin contact by simply brushing against the leaves. If you bruised the leaves or stems or broke thestem/vine, the urushiol is released to the plant surfaces.

Other Ways You Can Come Into Contact With Poison Ivy Sap

The resinous qualities of poison ivy sap make it difficult to remove from skin and objects. Water alone will not remove the sap. Urushiol often contaminants garden tools, clothing, and even the fur and hair of pets. You should never burn poison ivy since the urushiol can be carried by ash and dust particles or the smoke. Urushiol remains active even when the plant is dormant and or dead. There are recorded allergic reactions to 100-year-old museum specimens.

Sensitivity does vary, with some individuals showing only minor symptoms. Others are so sensitive that exposure to a molecular trace of urushiol - about two micrograms or less than one millionth of an ounce - on the skin will cause a reaction.

Itching, redness, and blisters are the typical reaction to poison ivy. It occurs when urushiol has been absorbed through the skin and bonded with proteins to create new compounds, which the immune system treats as an invading disease. These symptoms can occur as long as a week after contact.

An allergic reaction can be serious. About 10% of lost work time in the U.S. Forest Service is due to poison oak and poison ivy. Firefighters who breathe the smoke from burning poison ivy are especially at risk.

There are some precautions you should take when handling poison ivy to avoid getting a rash. You should at all times try to minimize your exposure. If you're gardening in an area where poison ivy is present, wear protective clothing and gloves. You may also choose to use a pre-contact solution to help block the effects of poison ivy.

If you've touched poison ivy, clean the spot immediately. Urushiol will penetrate the skin in 10-15 minutes, and once it has done that, washing will be useless. Don't use plain water or water plus an oil-based soap, because urushiol is a hydrophobic oil. Rinsing with plain water is likely to spread the oil further.

You can remove poison ivy by digging up the plants, using various methods to kill the plants, such as herbicides and organic solutions. Each has specific instructions with varying results.

How to Kill Poison Ivy

There are several methods for killing poison ivy. Some use poisons while others offer organic solutions without the use of harmful harsh herbicides and other poisons. The easiest way to kill poison ivy is to pour boiling hot water on it or create a salt and vinegar solution to spray the foliage. Both methods will kill the above ground growth, but the roots will continue to produce foliage once it recovers, so neither are a permanent solution. You'll need to repeat the treatment when the poison ivy begins to grow again.

Learning About Poison Ivy and How to Control It

It's important to understand the reason why poison ivy is such a highly harmful allergen so you can protect yourself from it. Knowing the best way to remove or kill this invasive weed means you can be spared the painful rash many gardeners get.