Pines are one of the most recognizable trees on the planet. Closely associated with Christmas and other festive holidays around the world, these majestic and fragrant trees from the Pinus genus, are real crowd pleasers. Fortunately, they are also easy to plant and maintain, which makes them a popular pick for professional landscapers and homeowners alike.

The white pine is the largest pine in North America. In the colonial period, all white pines greater than 24 inches in diameter were legally reserved for shipment to England, where they were used as ships' masts. This was the tree of choice for most commercial uses until about 1890. 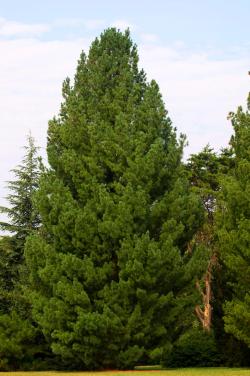 The Scots or Scotch pine is native to Europe and Asia and was introduced to North America by European settlers. It is the most widely-planted tree for use as Christmas trees. It's valued for its stiff branches, dark green needles, and durability. 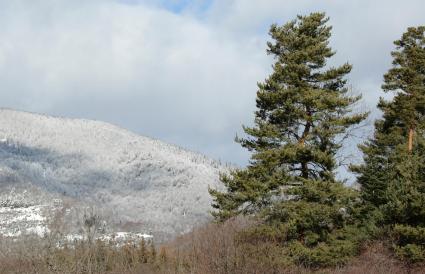 Popular among landscapers, the large Ponderosa can grow up to 80 feet tall. Its pyramidal shape and long needles make it an excellent choice for a windbreaker on large properties. 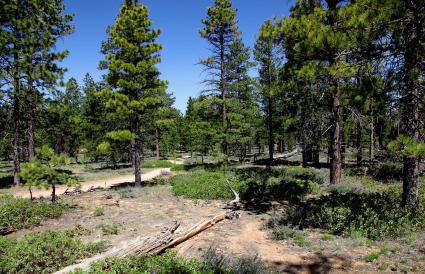 Bristlecone Pine: Known for its long life, the Bristlecone is among the shortest types of Pine trees. On average it grows to about 20 feet. Its short stature makes it an outstanding addition to a rock garden. 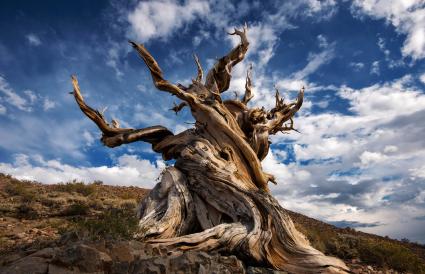 Also known as the Austrian Pine, this highly attractive tree is a top pick for homeowners looking to add a Pine to their property. The tree is easy to maintain, doesn't exceed 60 feet in height and features eye-pleasing dense, dark green foliage. 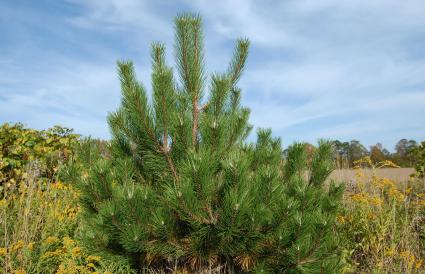 Austrian Pine (Pinus Austriaca) - One of the best and hardiest pines; distinct in form and color, attaining a maximum height of nearly 100 feet, of close, dense growth when young, thriving on calcareous and poor stony or rocky ground and on clay soils (but not on poor sands). Owing to its close "covert" and habit it nourishes the ground beneath it so well with its fallen leaves that it is self-supporting and gives precious shelter. It is often planted in Britain but generally set out in the usual specimen way so that the tree is slow to take its true form as it does when grouped as trees should be. The final form of the tree, which so far we hardly ever see in our grounds, is very picturesque, with a free open head, but, being a free grower and giving valuable wood, however, grouped or massed it should be freely thinned to allow of its full development. 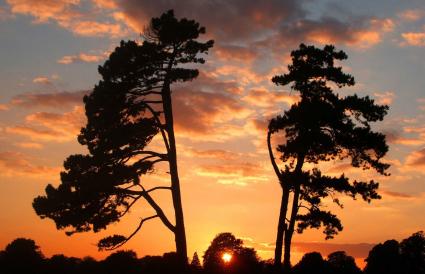 Pinus Coulteri - A Californian tree, not so large as other kinds from that great country of Pines, but remarkable for the great size of its cones, which are often 20 inches long and weighing 10 lb. in its own country. In England, this tree should be planted only under the most favorable conditions, in sheltered valleys and on warm soils. 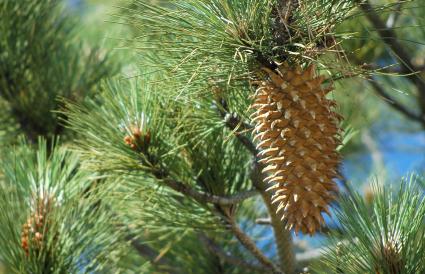 Himalayan Pinus (Pinus Excelsa) - A handsome tree, much planted in Britain, with long, slender, drooping leaves and pendent cones. It is a native of the Himalayas and of very wide distribution in Asia, and also in another form inhabits the mountains of Greece and S.E. Europe on high elevations. In England, it thrives in warm and well-drained soils. 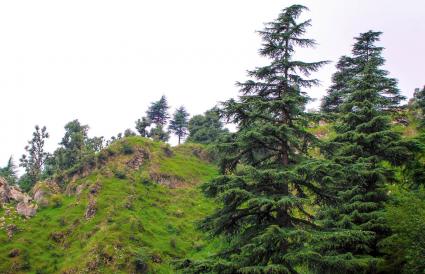 Jerusalem Pinus (Pinus Halepensis) - A distinct and very useful Pine throughout the rocky parts of Greece and its islands, also Crete, Asia Minor, Syria, and Palestine. When one travels in those countries the hills seem very bare until you get near their slopes, when the welcome growth of this pine appears, a frequently graceful and stately tree. Coming from such a hot country, it is not likely to be so useful, except in warm districts. 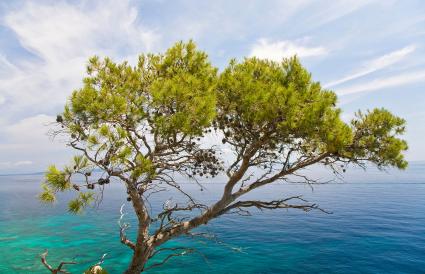 Monterey Pinus (Pinus Radiata) - A beautiful Pine of the seashore of California, grass green in color, and often thriving very well in the southern and western parts of England, but in inland places suffering in hard winters, although on high ground in the home countries healthy trees may be seen. Syn. P. insignis. 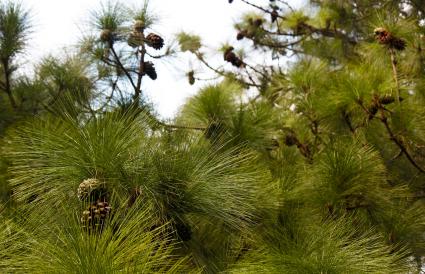 Sugar Pinus (Pinus Lambertiana) - A noble tree of California and Columbia River, reaching a maximum height of 300 feet, and sometimes 60 feet in girth of stem. We cannot omit such a tree here, but could not expect it to make such progress as in its own genial climate, and where planted with us it is usual to do so in sheltered situations and in free, warm soils. The cones are each sometimes over 2 feet long. 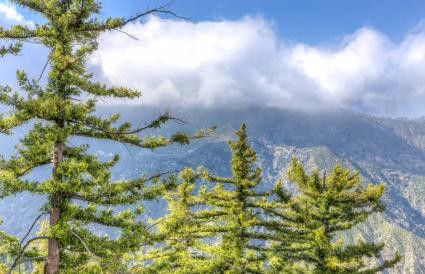 Corsican Pinus (Pinus Laricio) - The tallest Pine of Europe, reaching 160 feet high, and over in Calabria and its own country, Corsica, and of very rapid growth in England, as I have raised woods of it in ten years. The tree, if one raises it from seed, as we should in planting, shows a great variety of habit and even foliage, and if one liked to do anything so foolish one could give Latin names to several forms found in one wood. The Calabrian variety is a more vigorous tree, especially in poor soils. 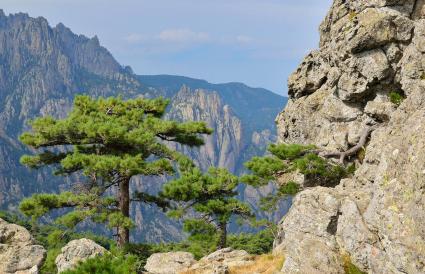 Mountain Pinus (Pinus Montana) - A dwarf, very hardy Pine, which clothes the mountains of many parts of C. Europe with a low bushy growth not much larger than the Savin or Furze, but under better conditions getting into a larger state, sometimes into a low tree. In England, it is often called mughus and pumilio, but the best name for the species is the one given here. It is a useful and distinct Pine for clothing banks and giving cover between taller trees. 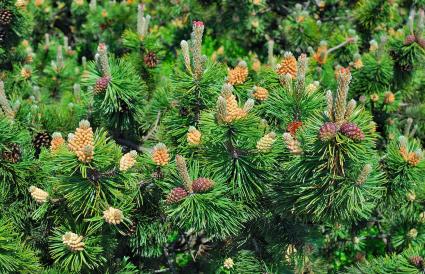 Pinus Parviflora - A medium sized and pretty tree, with dense foliage, cultivated much in Japan, and a native of the northern islands, therefore a hardy tree with us, thriving in deep soil. 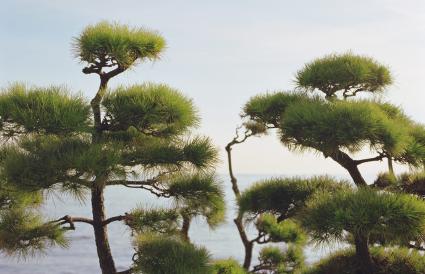 Cluster Pinus (Pinus Pinaster) - A beautiful Pine of pleasant green color, 70 feet or more high, native of the Mediterranean region, often by the seashore, and useful in England near the sea, but often thriving in inland places, best in free and sandy soils. It is also used much in France as a protection against the encroachment of the sea. 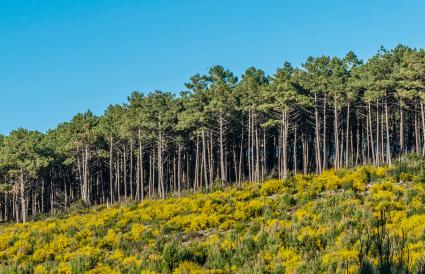 Stone Pinus (Pinus Pinea) - A distinct and picturesque Pine, old trees attaining a height of 70 to 75 feet. This very characteristic Pine of Italy is not hardy in England. It has been often planted here, but does not survive hard winters, and should not be planted except in the most favored parts of the south. It is a native of sandy and rocky places by the seashore in Greece, Syria, and Asia Minor. 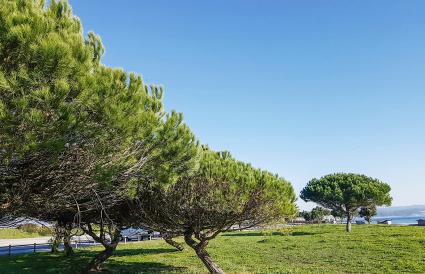 Western Yellow Pinus (Pinus Ponderosa) - A very noble tree, reaching nearly 300 feet with a trunk girth of over 45 feet, but in the arid regions found much smaller. Sometimes one may see trees branchless for over 100 feet but in quite a healthy condition. It inhabits Montana, British Columbia, W. Nebraska, and N. California, and is hardy in Britain. There is a form found on the eastern side of the American continent which is hardier. P. Jeffreyi (Black Pine) is now supposed to be a variety, also scopularia, but it does not grow quite so tall as the others. This P. Jeffreyi is found 1,500 feet high on the eastern side of the Rocky Mountains, this answering for its hardiness. 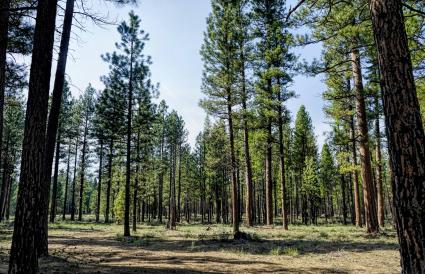 Pyrenean Pinus (Pinus Pyrenaica) - A fine, rapid-growing tree, with bright green foliage. A native of the Pyrenees and Spanish mountains, and also in the south of France; 60 feet to 80 feet high. P. Brutia is supposed to be a form of this. 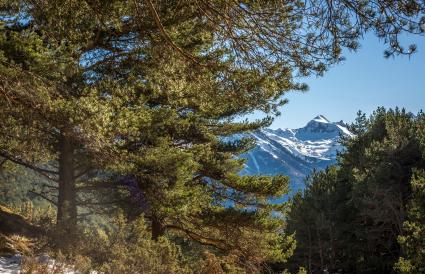 Red Pinus (Pinus Resinosa) - A tall Pine, 100 feet to 150 feet high, Newfoundland to Manitoba, and southwards through the New England States. From its northern area of habitation, this should be a hardy and thriving Pine in Britain. 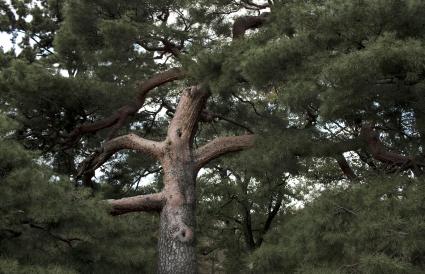 Torch Pinus (Pinus Rigida) - A forest Pine reaching a height of 80 feet on sandy and rocky places in Canada, Kentucky, Virginia, and the eastern states. This Pine is hardy and a rapid grower in Britain, growing in moist places less likely to suit the greater Pines. 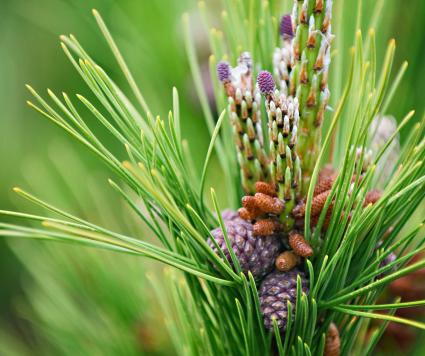 Grey-leaved Pinus (Pinus Sabiniana) - A very interesting Californian Pine, inhabiting the dry and warm hills and the coast ranges and foothills of Sierra Nevada; not often a very high mountain tree. The grey foliage gives the wild trees the appearance of clouds in the distance. 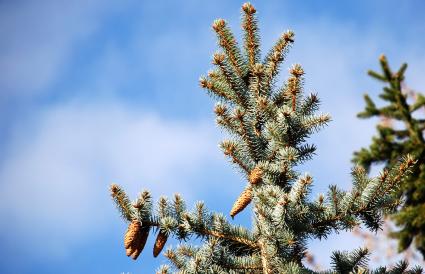 Swiss Pinus (Pinus Cembra) - A hardy northern Pine of distinct, close-growing form, and a very slow grower in England, as well as in its native land on the mountains of C. Europe or in Siberia, where it attains a maximum height of 100 feet. 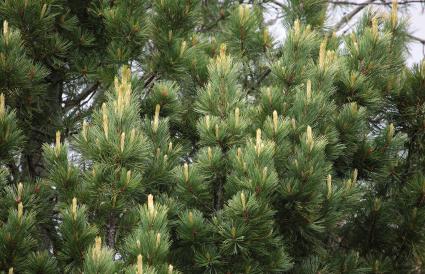 Description and Appearance of the Pine Tree

Botanists estimate that there are close to 125 species of Pines worldwide. Their height ranges from 45 to 135 feet with some Ponderosa Pines exceeding 250 feet. Despite their differences in height, Pine trees share a host of common characteristics that make up their familiar appearance: 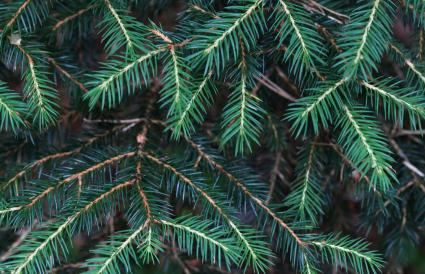 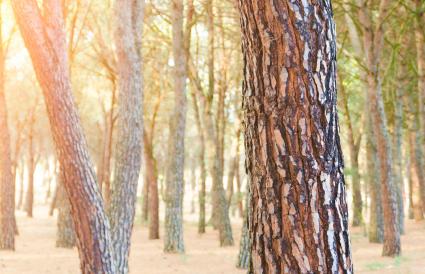 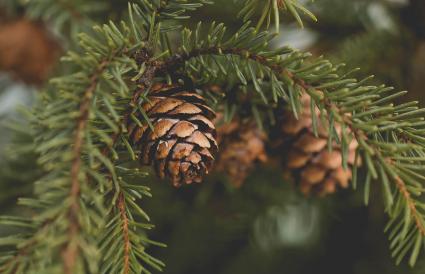 Most Pines live between 100 and 1,000 years, though some have survived to nearly 5,000 years old. The Great Basin Bristlecone Pine is recognized as the world's oldest living organism having lived to roughly 4,600 years old. Bristlecone pines can reach an age far greater than that of any other single living organism, up to about 5,000 years. They are very important in the study of dendrochronology, or tree-ring dating. Bristlecone pines often grow in clonal colonies, where trees now alive developed as shoots from older growth; the life of the group can date back tens of thousands of years.

The Many Looks of the Pine Tree

Some species are well adapted to extreme conditions of elevation, latitude, and aridity. In general, pines are easy trees to grow. Several species are used in reforestation projects. Pines are fast-growing trees.

Where the Pine Tree Grows

Of the nearly 125 species of Pine trees on earth, roughly 90 percent can be found in the Northern Hemisphere, in places such as:

In addition, some species, such as the Loblolly Pine, thrive in the Southern Hemisphere, including Brazil, South Africa, and New Zealand. These same hardy species thrive in the Southeastern United States, from central Texas to Georgia and the Florida Panhandle.

Despite what you see at Christmas, Pine trees are not reserved exclusively for decorating houses, hotels and shopping malls. Pines are one of the most important timber trees. Many are grown commercially as a source of wood pulp for paper since they grow so quickly and can be planted in rather dense stands. Other popular uses for Pine trees include:

The Pine tree has legions of fans, though no group is credited with uncovering as many uses for the Pine as the Iroquois. According to folklore, the ingenious settlers not only used the tree's wood to manufacturer canoes, but they also used Pine resin to seal the seams of their watercrafts.

Other noteworthy facts about Pine trees include:

Pine trees are gorgeous and hardy, but they are not problem-free. The pretty trees are susceptible to a range of diseases, such as:

If not treated properly, the diseases can weaken the Pine and potentially kill it. Signs that you may need outside help in treating your tree include needle discoloration, holes in the trunk or defoliation. In addition, the pine poses other problems for people in general. A pine forest can be in danger from a fire because pine resin is very flammable. Under certain conditions, the entire tree can explode in flames. A small number of people are quite allergic to pine resin. Members of this group sometimes find that the scent of pines can trigger an asthma attack.

Pine trees are immensely popular because they require minimum care in order to grow and prosper. You can easily add Pine trees to your property and get them to thrive by following these five tips:

There are many types of pine trees that you can use in your landscaping design. The fresh scent of pine will add a fresh and powerful scent to your garden and yard.