The name scarlet pimpernel was made famous by a turn of the century novel and theatrical production in Britain that borrowed the name of this small plant native to Europe. Scarlet pimpernel is considered a noxious weed in most places, but its close relative, blue pimpernel, is an attractive, non-weedy landscape plant.

Pimpernels are known for their star-shaped five-petaled flowers which are only open when the sun is shining. They close immediately in cloudy conditions and are considered a type of natural weather forecaster in traditional folklore. 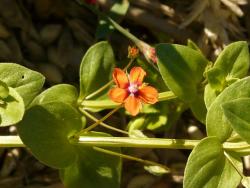 Scarlet pimpernel (Anagallis arvensis) is an annual species with salmon-colored blossoms, though the name would indicate otherwise. It is a very attractive plant and is available from some seed suppliers, even though it is not recommended for planting in most regions due to its invasive qualities. 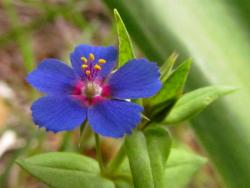 Other than their aquamarine color, blue pimpernel (Anagallis monelli) bears nearly identical flowers to scarlet pimpernel, but grows as a short-lived groundcover. It is only hardy as a perennial in areas with mild winters, though gardeners often grow it as an annual in mild climates. 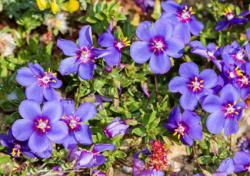 Blue pimpernel can occasionally be found in garden centers with the bedding plants or groundcovers, but it is also easy to grow from seed. It is most successful if sown indoors in flats in late winter or early spring. The tiny seeds need light to germinate, so they should be covered with only a very thin layer of soil. Keep moist until they germinate and then transplant to small pots. After all danger of frost has passed, plant pimpernel in its permanent location in the garden. 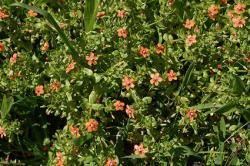 Pimpernel plants are sun-lovers, but have only modest water and fertility needs. In the wild, they tend to grow in poor, dry, rocky soil, though they are adaptable to almost any soil type as long as it is not overly wet. Blue pimpernel is often grown as a rock garden plant or as edging in front of flower beds. It grows eight to 10 inches in height and spreads up to two feet wide.

They are generally robust plants, but are susceptible to common garden pests such as slugs and aphids. The former are easily picked off by hand or treated with a product, such as Sluggo or diatomaceous earth, while the latter can be controlled with insecticidal soap.

Blue pimpernel is one of those uncommon plants that could easily receive more use. It flowers from spring until first frost, making a carefree filler for bare areas, especially where soil conditions are poor.