Peas are easy to grow once you learn how much sunlight and water they require. Peas grow in cool temperatures, giving this vegetable a short growing season. Select your favorite pea variety and add this delicious vegetable to your annual garden plan.

Peas are the small, round green beans that grow inside the pod of the vine Pisum sativum. In some varieties, the pod is edible as well as the pea. Peas are legumes, which means they are often grown as a 'cover crop' to fix nitrogen in the soil and make it more fertile for later plants.

People have been eating peas for a very long time. They have been found on archaeological sites in the Near East that date back almost 10,000 years. They domesticated shortly after wheat and barley, approximately 7800 B.C.E.

Today, gardeners can choose from many varieties. There are very early, smooth-skinned peas, early, middle-, and late-season wrinkle-skinned ones, and even a few heat-resistant varieties that can be grown into early summer. Some are dwarf or bush peas, and climbing or vine peas. There is also the 'snow-pea' type, which is grown for its delicious pods, and which also come in tall or short varieties.

First Vegetable of Season to Harvest

These are all "green peas" or "English peas" grown for immediate consumption, not the varieties grown to be dried. They are cool-weather crops. Peas are probably the first vegetable you will harvest from your garden, and the entire crop will be over in time to plant something else in that space.

Learn How to Grow Peas

There are several things you need to consider before you sow your first pea seed. The right growing conditions, such as climate, soil, water, and sunlight determine how well your crop will grow and how much of a harvest you can expect. 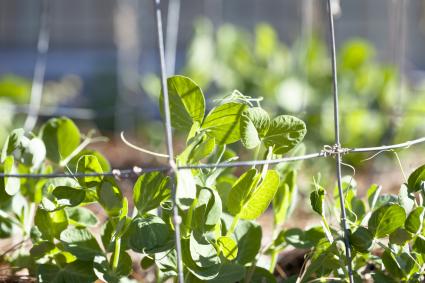 The number of days it takes for a pea to harvest is usually about 60 days. You can check the seed packet for the exact number of days.

Some pea varieties require full sunlight while other peas will grow in partly shaded locations. You should always check the light requirements on the seed packet before designating a growing area for peas in your garden.

Peas prefer to grow in light, sandy loam although they can grow in other types of soil. The soil should hold moisture without becoming waterlogged. Good drainage is important since the seeds and plants will rot if the soil is too wet. 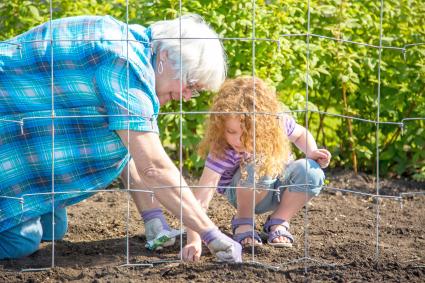 Peas don't like heavy clay soil. Sandy soil is good for early planting because it warms up earlier, and if it's in a raised bed, it will warm even faster. Heavier soils are often good for later planting since the roots will stay cooler longer.

You can prepare the soil before planting. According to The Old Farmer's Almanac, you can add compost prior to sowing seeds. It's also recommended that you amend the soil with a mixture of bonemeal and wood ash (potash).

Pea seed is often treated with a fungicide, a useful precaution as peas are prone to fungus diseases that can ruin the crop and remain in the soil for a long time. The bright pink color on the seeds is the fungicide. Be careful that children and pets don't eat them as ingested fungicide can be harmful. 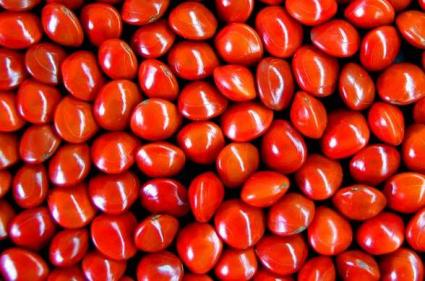 If you have a long cool growing season, you can plant several varieties with different maturing intervals, so you can pick peas over a longer time period. You can also plant seeds every week or so in early spring for a staggered harvest.

When to Sow Peas

You can sow peas anytime during the four to six weeks prior to the last frost in spring. You can also have a fall crop of peas although the growing season may be very short compared to spring plantings. 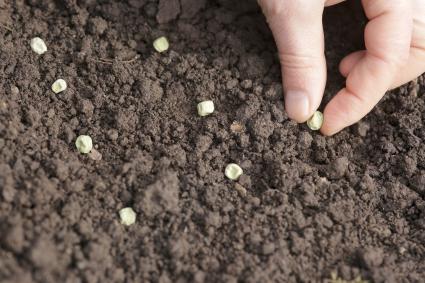 Seeds should be planted one to two inches apart at a one-inch depth. In cold weather and wet soil, plant individual seeds one inch deep. You can just poke them in with your finger and pat the soil back over the hole. If you're planting in rows, space this 12 to 24 inches apart.

In warmer weather and drier soil, make a trench about four inches deep. Water the soil thoroughly. Plant the seeds and cover them with about two inches of soil. As the seedlings go, you can leave the trench only partly filled so that it catches water, or you can gradually fill it and mound some soil around each plant to keep the roots cool.

Simple Instructions on How to Grow Peas

Tall peas need support as they grow and even bush varieties will benefit from support. You can grow peas on a fence or trellis, or you can use pea sticks - well-branched sticks four or five feet tall thrust into the ground. The vines are quite delicate. Be careful not to step on them or move them around and weed carefully. 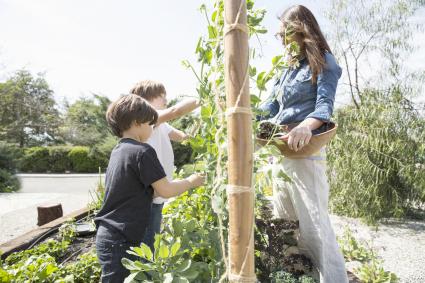 If you prepared your soil there should be enough nutrients for the growing season. Some gardeners prefer to add a top dressing with a balanced fertilizer when the peas are about six inches tall.

Pick peas as soon as you can feel the round peas within the pod but the peas aren't hard. The pods are typically around three inches long. If you're not sure, open a pod and taste the peas. Pick them as early as you can because the sugar in the peas will turn to starch and they will lose their flavor if they're left on the vine too long. Pea vine produces from the bottom up, so look at the base of the vine for the first mature peas.

There are several delicious varieties of peas you can learn how to grow. Some are early varieties that do best in the sprint while others prefer the short growing season of fall. 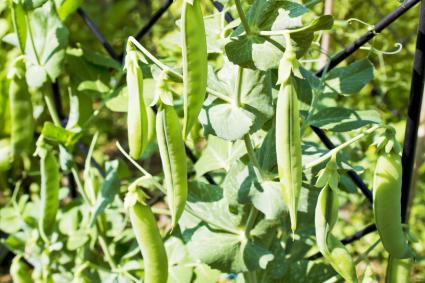 You want to include one or more early variety for your pea section. Plant a week apart for succession plantings.

Many gardeners prefer to play a fall crop. You can select a variety that's popular for this late crop planting.

A few pea varieties can tolerate heat. Select these to produce a larger yield of peas during the growing season.

Edible pods are best harvested while the pod is small for the sweetest taste. Peas are typically plump and sweet tasting.

There are many possible problems with peas, but often they flourish with no difficulties at all. Pea aphids and pea weevils can attack them. Dust the plants with rotenone. Mildew and root rot are possible. Fusarium wilt distorts the leaves and stunts the plants. Most problems can be avoided by rotating crops. If you suspect any viruses or fungi are present, destroy the plants after harvest instead of tilling them under. If you're sure the plants are healthy, turning them under at the end of the growing season will enrich the soil greatly.

Learning How to Grow Peas

Once you understand how to grow peas, you realize it is an easy crop to grow and harvest. When you plan for the short growing season, you can produce enough peas to freeze and can as well as enjoy fresh out of your garden.

Comments
© 2006-2021 LoveToKnow, Corp., except where otherwise noted. All Rights Reserved.
How to Grow Peas