Mullein (Verbascum spp.) is a striking biennial plant that sends up flower stalks taller than a person in a single growing season. It often spreads itself from seed and is one of the easiest plants to naturalize in your garden.

There are a few different kinds of mullein, but the one most commonly seen is Verbascum thapsus, known simply as common mullein. This plant has medicinal properties and is often seen growing wild along the side of the road, especially on eroded hillsides, though it has such spectacular ornamental qualities that gardeners also plant it in their flowerbeds.

Mullein starts its life as a low-growing clump of enormous grey-green leaves, which can be up to two feet long. The foliage has a fuzzy texture similar lamb's ear.

Being a biennial, it spends its first year without flowers, but in spring of the following year, mullein plants send up an enormous flower stalk which becomes covered in one- to two-inch yellow flowers. Rather than blooming all at once, the flowers develop slowly as the stalk grows skyward, opening over a period of several months from late spring through early fall. The height of the flower stalk varies from 18 inches on dwarf cultivars to eight feet on particularly robust specimens.

Besides its unusual appearance, mullein is notable for growing in the toughest imaginable locations. It is not uncommon to see this enormous plant growing from the side of a cliff in the wild and gardeners will find it useful for growing in bare, rocky soil where little else will thrive. It grows well in typical garden beds, too. As long as the soil isn't constantly wet, mullein will grow almost anywhere. It is hardy in USDA zones 5-10. 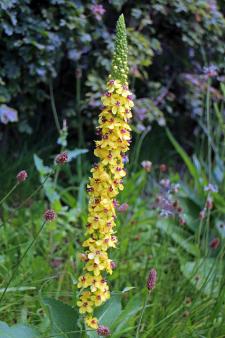 Mullein is useful in mixed perennial borders where it will pop up as a surprise among other flowers as it seeds itself in different places from year to year. It attracts many beneficial insects, making it a good choice to include in naturalized environments, such as wildflower meadows.

Mullein is not native to North America, but has been naturalized throughout the continent for centuries. Though it spreads itself by seed, it only grows in the wild in highly disturbed areas so it is not considered an invaisive species with potential to displace native species.

There are numerous mullein cultivars which can be bought in nurseries already in full flower or started by seed. Seed germinates readily just by being cast onto any patch of bare soil in spring. It prefers full sun, though some of the cultivars mentioned below will tolerate partial shade.

Mullein does not need to be watered, fertilized, or mulched and is not bothered by pests and disease. If planted in a bed of ultra-rich soil, or if it receives fertilizer run-off from other plantings, the stems can become weak and flop over - so it's best to avoid planting it in these locations.

The only chore with mullein is to cut the plants off at the base after they finish flowering in fall of their second year. If you want it to reseed, leave it until all the seedheads have turned brown and dry. If you'd prefer to not have mullein seedlings popping up nearby, be sure to cut it while the seedheads are still green.

Mullein has a long history of medicinal applications, though these uses only apply to the common mullein (Verbascum thapsus), not the ornamental cultivars. Both leaves and flowers are used. If the foliage is desired, it should be harvested during the first year of growth, as the plant directs its energy into flowering and setting seed in the second year.

Clip off the younger, more tender leaves with scissors rather than pulling them off, which could injure the plant. The flowers should be harvested as soon as they open, since they fade quickly and you will want to get them when they are fresh.

Ornamental mullein cultivars are typically shorter than the basic species and have smaller leaves. These carieties are commonly seen as potted plants in nurseries. Seed for the basic species is commonly available from seed complanies.

Not only is mullein useful in the garden, it is a valuable herbal remedy, especially for respiratory ailments and earaches. The flower stalks are attractive in large indoor arrangements.