Monkey flowers are a group of native North American wildflowers known for their bright colors and the cute appearance of the blossoms. The botanical name Mimulus comes from a Latin root word that means 'to mimic', a reference to the flowers resembling the face of a monkey.

Most of these flowers are sun-loving perennials growing two to three tall and wide, though some are smaller and grown as annuals. 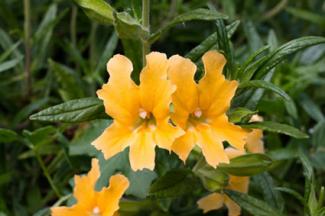 There are dozens of species native to the arid regions of the western United States, which often go by the name of sticky monkey flower because of the sticky resin that covers the plants. The western species like dry, rocky infertile soil and are commonly used in native plant landscaping schemes.

Varieties of Mimulus auranticus are the most commonly grown. The basic species has orange tubular flowers, though many cultivars have been developed: 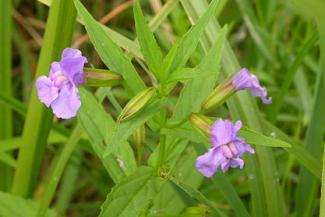 The western species grow poorly outside their native habitat, but there are several species native to the eastern United States. In contrast, eastern species like to grow in wet places and are sometimes used in bog gardens. However, they will grow in typical garden soil as long as consistent irrigation is given.

The eastern species are typically grown as part of wildflower mixes seeded in fall. 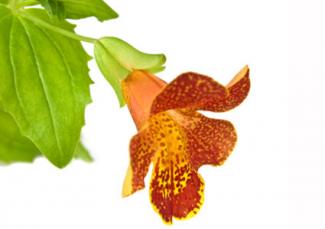 A few colorful hybrids have been produced for use as annual bedding plants. These varieties grow from six to 12 inches in height and are typically offered in mixed batches with names like Magic Blotches, Magic Mix, and Calypso Mix, which all contain a mix of pink, red, orange, yellow, and white splotched blossoms.

While wildflowers like the monkey flower are easy to care for and don't require a lot of maintenance, standard gardening practices still apply. All plants need water at first and mulching is almost always a good idea. Flowers used as bedding plants should get treated like any other bedding plant in that they need rich, loose soil, and regular water. 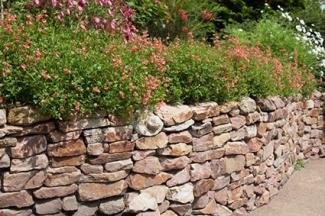 Monkey flower in a sunny border

The way monkey flowers are used depends on the variety in question, though they are primarily seen as flowers for a naturalized perennial borders. They are very attractive to hummingbirds and generally bloom over and over from mid-spring until the first frost. Their diversity of color, form, and cultural preferences is a great benefit for gardeners looking to fill a specific niche in their plant palette. The moisture-loving species, for example, are one of the few repeat flowering plants available for bog gardens.

As native wildflowers, monkey flowers are not prone to pests and disease, as long as they are planted in the environment that is appropriate for each species.

With so many bright colors to choose from and the adorable monkey-face appearance, monkey flowers are a delight to play with in garden design. Whether you have a wet spot, a dry, rocky area or are just looking for a new bedding plant to experiment with, there is a species out there that will fit the bill.