Mock orange (Philadelphus Coronarius) is a deciduous shrub native to Southern Europe. It is in the family Hydrangaceae. Mock orange is a popular ornamental shrub grown for its fragrant flowers and its heartiness. It can act as a hedge or privacy screen, add color to a flower bed, or be the center of attention.

Mock orange shrubs grow up to 10 feet tall and eight feet wide. They have bowl-shaped, white flowers that are very fragrant and have a prominent stamen. The species as a whole has a profusion of flowers, but some cultivars have fewer blooms. 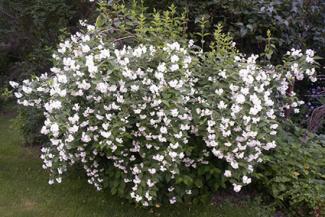 Mock orange shrubs are not hard to grow. They will grow in containers or in the ground, and they are hardy to zones 4-7. Simply follow these steps to have fragrant, beautiful flowers each summer.

Mock orange grows best in full sun but will tolerate partial sun. Find a sunny spot that is well-drained as mock orange does not do well with wet feet. Till the soil to a depth of six inches. Till in about three inches of compost. Now you are ready to plant your mock orange shrub.

Most mock orange plants are sold as container-grown shrubs. This means you can plant the shrub any time of the year. However, winter is the best time to plant shrubs as they are dormant, and it is not as big a shock to them. Dig a hole that is big enough around and deep enough that the entire root ball can fit into it. Carefully lift the entire root ball out of the container, and place it in the ground. It should be planted at the same depth as it was in the container. Put the dirt you removed from the hole back in around the root ball. Do not add fertilizer or additional compost or other amendments to the soil, or the roots will grow in a circle in the hole and girdle the shrub. Water in the shrub well.

Mock orange is easy to maintain. Water it with one inch of water a week for the first year after it is planted. After that , you will only need to water it when it has been very dry.

Mock orange shrubs are healthier when pruned yearly. Since blooms appear on last year's wood, a good time to prune is right after the plant blooms. Cut one-fifth to one-third of the oldest branches off the plant. You want to cut the branches where the blooms appeared in addition to trimming any broken or diseased branches. Pruning helps improve the appearance of the plant and will encourage more blooms by opening up the center of the plant to sunlight.

Mock orange is resistant to both pests and diseases.

Mock oranges make wonderful privacy screens or hedges and provide fragrant flowers that smell of citrus in early summer with a minimum of care. In addition, they are drought resistant, pest resistant, and disease resistant making them ideal shrubs for a variety of uses. With a little care, your mock orange shrub will thrive for years to come.