Maple tree pruning may be done in the spring, with the best months to prune being the time immediately after leaves appear. If you prune the tree in the winter or springtime, the sap bleeds or runs out. While this won't harm the tree, it doesn't look very pretty, so prune the tree in late spring or summer if you can.

Most experts agree that you shouldn't prune more than 15 percent of the maple tree in any one year. It's better to prune a little bit each year than to prune a lot one year.

Even though the tree will be fully leafed out during the actual pruning, careful planning before foliage season can be a big help. During the winter, when the deciduous leaves have fallen, inspect the bare branches of your maple. Note any limbs that should be removed and tie a ribbon around the lower ones. You can use a ceiling painting wand (or a brush tied to a stick) to mark higher limbs that need pruning. Simply use any house paint sitting around to do the marking.

Selective pruning that opens up the canopy mitigates disease and pest risks. Allowing good air circulation through the branches is critical to propagating tree health. 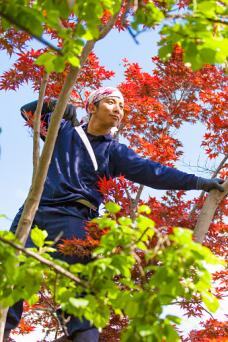 You can prune off little twigs coming off the stem of the maple tree. By pruning off the little branches, the tree will put further energy into growing up and out into the larger branches. Note any split or U-shaped limbs. They may not be much trouble for a young tree, but they will become prominent weak areas that can kill or shorten a tree's lifespan as it matures. These issues can become difficult or impossible to remedy later on.

Trim away side shoots and any branches that hinder others, interfere/scrap other branches and any limbs that are diseased, broken or unthrifty. Dead branches need to be cut away as well. Remember to clear away any of the debris that falls around the base. Rake up leaves and twigs- this is where diseases and pests proliferate. When fungus takes hold of a dead or weak limb, it can spread to the main tree.

Always use sharpened pruning shears or loppers specifically designed to cut through tree branches. Make cuts at an angle, and make the cut as close to the living part of the tree as you can.

Pruning supply needs vary by individual. The basics include:

Prune branches off that need removal following these simple instructions.

Pruning young maples can be done with ease. Older trees will generally require a professional, but cutting lower level and smaller branches can be accomplished by the home owner. Do not remove too many large limbs on mature trees.

Safety note: Canopy pruning on mature maple trees involves significant risk to the arborist. Use pole saws to prune high-set branches, but be wary of dead fall. Limbs that fall from high up the trunk can cause serious injury. Never attempt to climb the tree unless you are ready to use correct safety equipment.

Maple trees can provide more than just shade and beauty. Try shaping and pruning certain desirable branches if you would like to plan for a swing, tree house or unique tree structure. Remember to look for limbs that are sturdy and connected to the trunk properly (crotches should not be split, or in a weak "U").

Young, pliable branches can be bent and guided. Gently bend the branch into the desired angle and use a rope with stakes To hold it in the right position. Periodically check on the stake and be sure the rope is not cutting into the growing branch.

After pruning trees, dip the pruning shears and other equipment into a bucket filled with one tablespoon of bleach to a gallon (or wipe the blade with rubbing alcohol) of water. Rinse off, dry and store carefully. The bleach and water solution kills any bacteria or fungi that may be on the equipment. These can infect the next plant you trim if they're not cleaned properly.

Most disinfecting agents are damaging to the metal of tools. Only disinfect the blades if you have trimmed known diseased plants. Always wipe clean any disinfectant residue to maintain your tools. Never store metal tools that are damp. 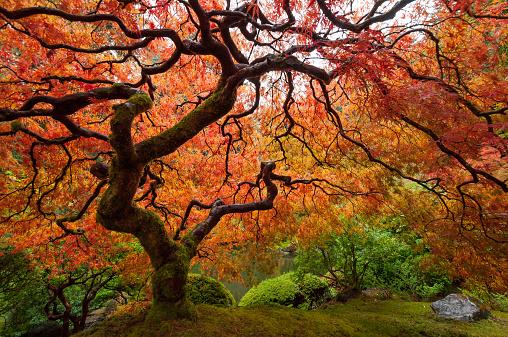 If you pruned your maple trees and the next day there's liquid running from the pruning spots, don't panic. The liquid is simply sap. While it's more likely to run during the fall and early winter, it can run at any time of year. The pruned areas won't heal as quickly if the sap is flowing freely, which is why many arborists recommend waiting until the late spring or summer when the sap is least likely to run before pruning.

You may also see your maple trees oozing sap during other times of the year. Check the trunk for teeth marks, particularly in the fall or winter. Squirrels and other creatures love the sweet taste of maple sap and may even bite the trunk to start the sap flowing if they know what sweet taste is in store for them. It won't harm the tree, but it can be scary if you don't know what the stuff is running out of your tree.

It's best to avoid planting trees directly under power lines, but if your tree was planted before you moved into your home, or it's grown more aggressively and vigorously than planned, you need to decide whether or not it should be pruned. If the utility lines are publicly owned, the utility company will prune the tree. They will probably prune it very drastically. They have to; branches that entangle power lines can pull down the lines in a storm, disrupting service for many. Don't try to trim trees near power lines yourself. Call the utility company or a tree service.

Unfortunately, if you got carried away and over pruned your tree, there's nothing you can do right now. It's like getting a bad haircut; you have to wait for it to grow back. Hopefully you didn't prune away too many branches and weakened the tree. Remind yourself the next time you reach for your pruning shears not to go overboard!

In years past, horticulturist recommended painting over or sealing the trunk of the tree where the branches were pruned off. Newer research indicates that this isn't necessary; the tree heals itself effectively, sealing over the pruned areas and creating its own scar. So there's no need to bandage the pruned areas or paint them. Just leave the pruned areas alone and let nature seal it off.

Maple trees do not need much care to provide a striking and majestic focal point to any landscape. Whether you are maintaining healthy stands of maples for sugaring, or you are pampering a single shade tree, following a few simple pruning steps will keep your maples in tip top form.