The Ginkgo biloba tree (sometimes spelled Ginko) is a unique tree that has been scientifically classified in its own division. It is easily recognized by its fan-shaped, lobed leaves. This tree can grow over 100 feet tall and live for a millennium. Some specimens are said to be more than 2,500 years old, and the Shandong province in China reports a 3,00 year old ginkgo.

The word ginkgo means "silver apricot" in Chinese, and the same characters are used for the word in Chinese, Japanese, and Korean. The modern Mandarin name for the shelled seeds of the ginkgo tree is bái guǒ, which means "white fruit".

The ginkgo was long believed to be extinct in the wild, but specimens found in the Tianmu Shan Reserve of China's Zhejiang province may be wild. Some of these trees are estimated to be over 1000 years old.

The ginkgo is remarkably tolerant of difficult conditions, including urban pollution. Because of this, it is widely planted in cities. Four ginkgo trees survived the 1945 atomic bomb explosion in Hiroshima, even though they were less than a mile from the point of impact. The trees were burned, but recovered well and can be seen there today.

Ginkgo biloba is the only living member of a group of gymnosperms that date back over 270 million years ago, to the Permian period. This tree predates the dinosaurs! There was an increase of species during the Middle Jurassic and Cretaceous periods, and the tree was spread through Europe, Asia, and North America. By the Tertiary period, 65 million years ago, only two species survived. Ginkgo biloba is the only species extant today.The ginkgo has been cultivated in Asia, where it is valued as a food source as well as for its beauty. The oldest specimens are usually on temple grounds.

Engelbert Kaempfer, a German botanist and physician sent to Japan by the Dutch East India Company, found the ginkgo tree growing there in 1691. He described the tree in his 1712 book, Amoenitatum exoticarum, and sent seeds to Holland. One of the oldest ginkgo trees in Europe can still be seen growing in the Botanical Garden in Utrecht.

Ginkgo trees ordinarily grow to 80 feet in height with a spread of 30 feet, although specimen trees grown in open locations can be much larger. It has a medium growth rate. 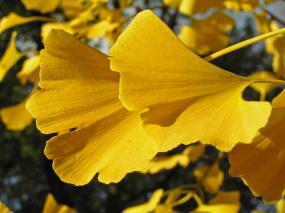 The beautiful fan-shaped leaves are unique. They can be up to three inches long, with a stem that is also up to three inches in length. They flutter in the slightest breeze.Each leaf usually has a vertical split at the top center, dividing the leaf into two lobes. The veins are slightly raised, which gives the foliage a ribbed appearance.

Ginkgo trees are either male or female. Most ginkgos do not flower until they are over 20 years old.

The male trees have cone-shaped pollen-producing catkins. These enclose motile sperm that fertilize female flowers. No other tree has motile sperm, but they are found in cycads, ferns, mosses, and algae.

Female trees have ovules which, when fertilized, develop tan-orange structures that look a little like cherries. Technically, these are not fruits; they are seeds, unprotected by ovary walls. The seedcoat has a silvery shine. It contains butanoic acid, which causes a strong odor like rancid butter once the seeds have fallen to the ground. Most people find the smell offensive, so trees planted for ornamental purposes are usually male.

Unlike other trees, the ginkgo can produce a kind of aerial root. These structures, called chichi, are produced along the trunk and branches. They grow down into the ground, where they form roots, as well as upward, where they sprout leaves. Chichi are usually found on old trees, but can be found on young trees as a response to environmental stress or damage.

Ginkgo biloba is hardy in zones 3 to 8. It grows best in full sun but also does well with partial sun.

It prefers to be planted in moist, well-drained, loamy soil, but it is very adaptable. It will grow in compacted and poor soils and withstand air pollution, salt spray, heat, and drought. This tree roots very deeply.

You can fertilize ginkgo trees once or twice a year. Don't mulch heavily.

Ginkgos can be grown from seeds, which require both scarification and stratification. Some people have an allergic reaction to the fleshy membrane around the seed, so wear rubber gloves when harvesting and cleaning the seeds. It is often impossible to determine the gender of the offspring for the first twenty years of growth.

Ginkgos are also propagated from hardwood and softwood cuttings and by grafting. This is the best way to be sure of the sex of the new tree. Most commercially-grown ginkgos are started this way.

Ginkgo biloba are wonderful shade trees. Because they are large trees, they provide a focal point in the landscape. Dwarf cultivars are more appropriate for small urban and suburban spaces.

Ginkgos are often planted as street trees because of their tolerance for urban conditions.

Ginkgo biloba is also grown as bonsai. It can be trained as a hedge, climber, or espalier.

The nut-like "meat" of the seeds is often used in Asian cooking. Canned seeds, labeled "White Nuts", are available in the West in most Asian food stores.

The leaves and the seed have been used in Chinese medicine. It is mentioned in a text from the Ming dynasty, Lan Mao's Dian Nan Ben Cao, published in 1436.

Ginkgo leaf extracts are used in modern medicine, and clinical trials have shown its usefulness in treating a variety of problems.

Ginkgo biloba is unusually resistant to pests, illnesses, and environmental problems. Female trees are not suitable for pedestrian areas. This tree can grow very large, so it is not suitable for small spaces.