Used since ancient times, gardening and moon phases is a technique that's worth trying for a bumper crop of vegetables, low-maintenance lawn, or a pretty flower garden. Many old-time farmers and gardeners swear by planting in accordance with the moon phases. Before you scoff at the idea of lunar planting, consider the evidence.

The Background of Gardening and Moon Phases

Ancient cultures frequently used the moon phases to ascertain when to sow and when to reap their crops. Astrologers throughout the ages have charted the progress of the sun, moon and stars through the heavens. The belief that heavenly bodies influence the growth and development of plants and animals is found in many cultures from the ancient Mayans to the Greeks. Seed germination, garden planning and garden tasks can all be scheduled around moon and zodiac phases for best results. Thomas Jefferson, who did not subscribe to lunar gardening methods, kept a detailed gardening journal at Monticello. He was an avid vegetable and flower gardener and his journals are famous for their detailed insights into agriculture. Peggy Gilmour, a gardening writer, used Jefferson's writings to construct a chart comparing his plants to the moon phases. She discovered that when Jefferson planted peas on a favorable moon phase, he harvested them on average ten days earlier.

Formal research conducted in 1952 by Maria Thun of Germany yielded interesting results. Thun experimented with lunar planting and potatoes. She weighed each crop and kept careful records over a ten-year period, from 1952 to 1962. The results: if potatoes were planted when the moon was in the constellation of Taurus, Capricorn or Virgo (Earth signs) the crop was more prolific than if planted in other signs.

Test it yourself. Garden by the moon's phases, record your results, and study them to prove if this method works.

To begin gardening by the moon's phases, it's helpful to first look up the phases of the moon. Many calendars include moon phases. The United States Navy has an excellent online database that allows you to input the year and generate a full year lunar calendar. Print this calendar and keep it in your gardening journal for handy reference. 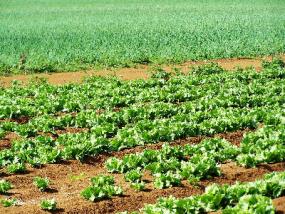