Many gardeners grow some of their plants from flower seeds. Gardeners who prefer to grow old-fashioned flowers plant heirloom seeds. Sometimes these seeds are not available commercially, and gardeners trade seeds to get the species they want. Other gardeners grow from seed because it is economical; a packet of flower seeds is much less expensive than a flat of seedlings. Some gardeners just enjoy the pleasure of raising their plants from the very beginning.

All flowering plants, or angiosperms, are naturally propagated by seed. Technically, a seed is an embryonic plant enclosed in a seed coat, or testa, normally including some form of stored food. Usually the seed is formed inside a fruit - which may look like a pod, husk, or cone.

Flower seeds are many different sizes. Orchid seeds, at about one million seeds per gram, are the smallest. The coco de mer palm is the largest. 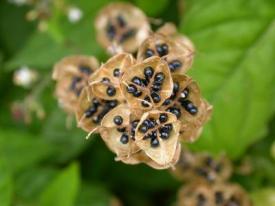 In their natural habitats, plants have developed a variety of methods to disperse their seeds to new locations. Good dispersal methods give angiosperms an advantage over simpler plants like moss or lichen. Dispersal methods include:

Seeds inside a fleshy fruit, like berries, are a favorite food source for many animals. The seeds pass through the animals' digestive systems and are dispersed to new locations in their droppings.

Acorns, walnuts, and similar seeds are carried to new locations by animals who hope to return and eat them later. If the animal does not return, the seed can sprout in a new location far from the parent plant.

Some plants produce very buoyant seeds, sometimes called sea-beans, which can float in rivers and oceans. When they wash up on distant shores, they germinate in their new locations. The New Guinea Creeper is a plant that produces drift seeds.

Trillium, bloodroot, and some other plants produce seeds with elaisomes, small appendages that provide food for ants. The ants disperse the flower seeds as they gather the elaisomes.

Plants like burdock produce seeds with small barbs or hooks. These attach to the fur of passing animals (or the pant legs of hikers!) and are carried far from the parent plant before dropping off.

Wind dispersal is one of the most common methods of seed distribution. Very small seeds, such as the dust-like orchid seeds, can be carried to distant locations by the wind. Others, like the maple seeds, have a wing that helps them float on the wind. Some, like milkweed seeds, have small hairs that catch the wind.

If a mature seed does not germinate even under favorable conditions, it is dormant. Many seeds require a period of dormancy before they can germinate. This allows time for seed dispersal in the wild. It also prevents all the seeds from germinating at exactly the same time, so that the entire year's crop will not be destroyed by bad weather or other unexpected problems.

The seeds of different species may require very different conditions for germination. The presence of enough moisture is essential. Light, temperature, and soil conditions are also important. Most seeds germinate when there is enough water to thoroughly moisten the seed but not soak it, when oxygen is readily available, and when soil temperatures are between 70 and 75 degrees Fahrenheit. Some species require light to germinate seed, while others require darkness.

Some seeds, especially those with very thick, hard seed coats, require special treatment, called scarification, before they can germinate. Passing through an animal's digestive tract is one example of scarification. The freeze and thaw cycle of winter also prepares some seeds for germination. In some cases very high temperatures, such as those created by a forest fire, are necessary.

Seeds are one way that plants can delay reproduction until conditions are favorable. Most flower seeds remain vigorous and able to germinate for at least a year after they are mature. However, seeds do not remain viable indefinitely, so using fresh seed is a good choice for the home gardener.

The oldest viable seed on record is a date palm seed recovered from Herod the Great's palace. It was carbon-14 dated as about 2,000 years old. It germinated in 2005 and grew into a plant. The second-oldest viable seed is the 13,000-year-old seed of the sacred lotus, found in northeastern China.

The longest continuously monitored experiment on seed viability is still being carried on at Michigan State University. In the fall of 1879, Professor William James Beal buried 20 bottles, each containing 50 seeds in sand, on the campus. He originally intended to dig up one bottle every five years and see if the seeds would germinate, but the experiment was so successful that the periods were extended. The fifteenth bottle was dug up in 2000, and the next will be uncovered in 2020. Twenty-five of the seeds unearthed in 2000 germinated successfully.

Storage temperature and seed moisture are the most important factors in seed storage. Flower seeds remain viable longer when the seeds are kept very dry and the temperature is below 40 degrees Fahrenheit.