There are eight species of Eranthis native to Europe and Asia. Eranthis hyemalis is the species most cultivated. Winter aconite grow from tubers.

The flowers of winter aconite are yellow in most species and white in E. albiflora and E. pinnatifida. These are the first flowers to appear each year, often blooming in late winter while snow is still on the ground. Their cheerful yellow is a welcome sight!

The leaves of winter aconite expand fully after the plant is in flower. They generally die back two to three months later, when the trees are in full leaf and the soil is dry.

All parts of the Eranthis are poisonous. Winter aconite was intentionally used as poison according to Greek classical literature.

Eranthis grows well in full sun to light shade. It is adaptable to a wide variety of soils, but it needs good drainage. It requires constant moisture during its growing season, but can tolerate dryness during summer dormancy.

Winter Aconite are generally free of problems. Because they are poisonous, even deer and rabbits usually avoid them. The tubers may rot in very wet conditions.

Eranthis can be propagated by seed or by lifting tubers after flowering but before the leaves have completely died back. They dislike being disturbed, so collect tubers sparingly. They will naturalize in favorable conditions. 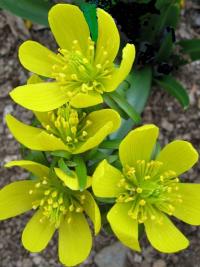 In their natural habitat, all species of Eranthis grow on forest floors, enjoying the sunlight of early spring before the deciduous trees have leafed out. They look wonderful planted in large drifts under trees. They are also very attractive in rock gardens. Many gardeners plant some near the door, so they can enjoy the early bloom.