Crocuses are native to meadows and woodlands. Early spring bloomers are most common; however, some crocuses bloom in the autumn. The name crocus is derived from the Latin crocatus, meaning saffron yellow. The spice saffron is obtained from the stamens of Crocus sativus, a fall-blooming species.

The flowers are delicate, cup-shaped blooms in shades of yellow, white, purple, and lavender. Many selections have bi-colored blooms. They have grassy leaves that usually have a white stripe along the center. Crocus grow two to six inches tall, with a spread of three to six inches. The leaves are grass-like. The flowers can be yellow, white, purple, or a mixture of these colors.

Crocus grow best in USDA plant hardiness zones 3 through 7. They do not do well in very hot climates. Plant in full sun to partial shade. They prefer well-drained soil and have good drought tolerance. The grassy leaves will die back after the plant blooms. Crocus plants are hardy perennials, grown from corms. Each year a new corm forms on top of the old one, and tiny corms, called cormels, form around its base. Each corm produces from one to five blooms. When planted in proper conditions, most self-sow and produce plentiful offsets. Plant the corms with the wide side down and the buds facing up. Place them two or three inches deep and about three or four inches apart. They will fill in as they multiply. If the bulbs become too crowded after a few years you can dig them up, after their foliage browns, and divide them.

There are over 80 species of this flower, about 30 of which are raised commercially. For a longer display of blooms, plant a variety of species and cultivars. 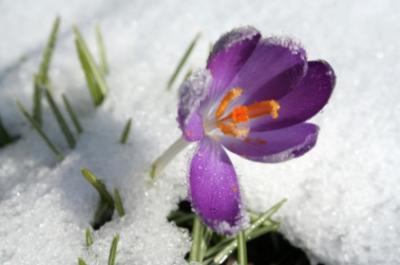 Spring crocuses are admired for their early bloom. Some varieties even pop their cheerful heads up out of the late winter snow. Plant spring blooming crocuses in the the fall for a brilliant early-season display. 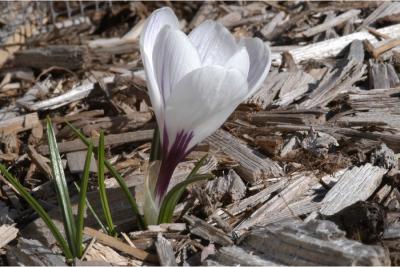 Although not as popular, fall blooming crocuses are equally as beautiful as their spring cousins. Plant corms in late August through September for fall color.

Crocuses are popular for naturalizing mainly due to the fact they spread so well. Corms can also be forced for indoor enjoyment or planted in containers. Because they like well-drained soil, plant them in rock and wall gardens. They are beautiful planted in drifts in flower beds or allowed to naturalize in lawns. If you grow them in the lawn, wait to mow the grass until six weeks after blooming; plants need their leaves to produce cormels large enough to flower the next year. Be sure to plant where you can see them from a window of your house. You don't want to miss the first flower of the year.

Crocuses are known to have very few disease or pest problems. It is always best to purchase healthy and firm corms. If squirrels like to munch on your bulbs, try securing chicken wire over soil after planting. They will have not problem pushing their way between the wire. Squirrels have been found to dislike the taste of some species, such as C. tommasinianus.