Camellias are evergreen shrubs known for their shade tolerance and winter flowering period. They have fairly exacting growing requirements, but are easy to grow if these can be met and are stunning at a time of year when most other plants are dormant. 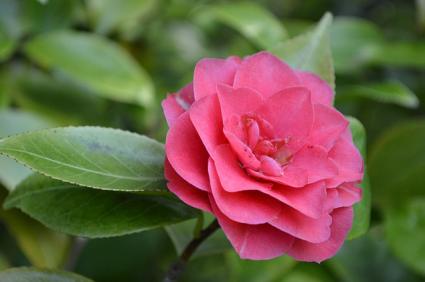 Camellias are not very cold hardy, but if you live in the warmer half of the country, they are great group of plants to explore. Size, growth habit, and bloom time vary among the different species and there are an almost infinite number of color combinations available among the hundreds of named varieties found in nurseries.

Generally, they are medium to large woody shrubs with an upright growth habit and glossy, oval-shaped dark green leaves. Flowers are usually between two and four inches across and are most often seen in 'double flower' form with multiple layers of rich velvety petals, not unlike roses.

Use in the Landscape 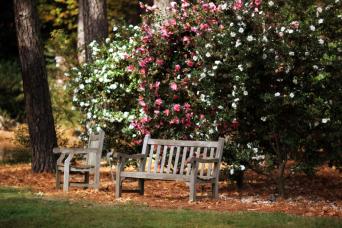 As evergreen shrubs, camellias are one of the top choices as a foundation plant or screen in shady locations. They will brighten these areas with their large, colorful blossoms at the darkest time of year. Though they make good hedge plants, they are not a hedge that should be sheared, as the flower buds form slowly over the course of the growing season - shearing removes the buds which will not form again until the following year.

Single camellias are used as a focal point in plantings of smaller shade-loving perennials. In larger landscapes, they can be scattered in clumps under tall trees along with other flowering shrubs that like shade and acidic soil, such as azalea, rhododendron, gardenia, and hydrangea. 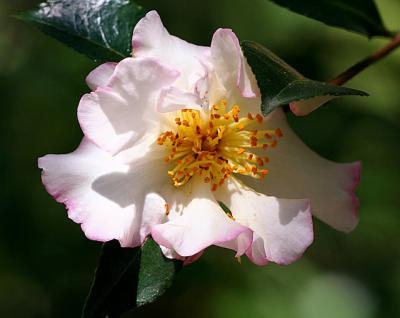 Camellia japonica, Camellia sasanqua, and hybrids between these two species are the most commonly grown for ornamental purposes. Japonica varieties typically have larger leaves, flowers, and overall size and bloom later than the sasanquas. Sasanquas are fall bloomers, while japonicas bloom between January and March, depending on the variety.

Camellia sinensis is the tea camellia - its leaves are the source of green, black, and white teas - and is occasionally grown by homeowners for this purpose. Tea camellias bear one-inch single white flowers and can grow to the size of small trees, but are usually kept smaller for the purpose of harvesting the leaves.

Spider mites and scale are two of the most common insect pests affecting camellias. They are nearly microscpopic in size and both are typically found on the underside of the leaves where they appear as white (spider mites) or gray (scale) splotches. Scale and mites can be removed by washing the leaves with water and rubbing them off manually, though large infestations are more easily treated by spraying with insecticidal soap.

Various pathogens affect camellias resulting in dead or deformed portions of the plant - root rot, leaf spots, twig dieback, and leaf galls are among the most common. None of these are treatable with chemicals, so it's best to remove the infected portions of the plant and incinerate or dispose of them in the trash. Sterilize pruning equipment by dipping in a rubbing alcohol or bleach solution after cutting any diseased plant to prevent the further spread of disease.

Queen of the Shade

Camellias are among the royalty of the plant world and, in the minds of many gardeners, are a cut above the rest when it comes to shade shrubs. They are slow growing, long-lived, and are generally free of pests and disease if their preferred growing conditions are provided.