Blanket flowers (Gaillardia) look like a cross between sunflowers and black-eyed Susans, both of which are closely related. They are easy-to-grow natives to eastern North America and the Midwest that blanket the ground in a spectrum of warm reds, golden yellows and deep oranges on their unique striated flower heads.

Growing one to two feet tall depending on the variety, blanket flowers are most at home in a sunny perennial border. The foliage stays low to the ground with three to four inch flowers rising on flexible stems. The blossoms are so profuse that the foliage is generally obscured during the mid to late summer bloom season. 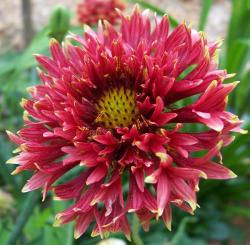 The flowers have large button-shaped centers similar to black-eyed Susans, except they tend to be bright and colorful, not just brown. The petals are often flat like a coneflower or sunflowers, but there are some unusual blanket flowers with trumpet-like tubular blooms.

Blanket flowers like bright, hot locations with light, sandy soil. They bloom best without fertilizer or excessive amounts of compost and are modestly drought tolerant once established.

Plant them in fall or spring and water weekly until established, which is generally after the first summer. Blanket flowers are not long-lived and may show signs of decline after three or four years. To reinvigorate, divide the clumps every few years as the additional growing space will strengthen the root system.

Besides watering, the only maintenance is to cut the plants back periodically. Giving a light trim to remove the first flush of dead flowers in summer will lead to a second flush of flowers in early fall. Before winter, cut the entire plant to within six inches of the ground to encourage lush, full growth the following season. 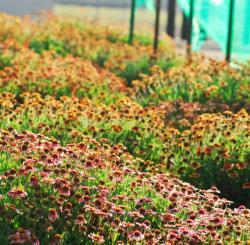 Pests and disease are rarely a concern, but aphids will occasionally show up. These are easily handled with insecticidal soap, however. Of more concern is a disease called aster yellows, which is transmitted by aphids. There is no direct form of treatment for the disease, but any blanket flowers whose flower buds remain green and without opening, a main sign of disease (along with yellow leaves), should be removed and destroyed to prevent it from spreading.

There are a number of named cultivars of blanket flower, all of which come in a similar palette of colors and look great when mixed.

One theory of the origin of the name blanket flower is that they resemble the rich colors and patterns of blankets made by Native Americans, who first introduced Europeans to these stunning North American flowers centuries ago. Use them to provide a carpet of color amid taller plants in the perennial border, such as salvias or lupines.