For some gardeners, apple tree diseases seem to run rampant through their orchards each year. While this particular fruit tree is easy to grow, it certainly has its share of problems. Luckily, many apple tree diseases are easy to deal with so even a novice gardener can diagnose and treat them.

Many diseases and pests are associated with specific types of apple trees. However, some of these diseases are common among all apple tree varieties. Discover the typical diseases that can infect apple trees, along with how to deal with them. 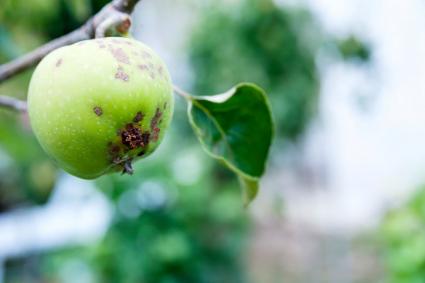 Starting in early spring, apple scab appears on the underside of leaves, then spreads to other parts of the apple tree. Spores are moved by spring rain, and they infect new leaves and fruit, according to Washington State University (WSU). You may find black, sooty lesions on leaves, blossoms, sepals, petioles, pedicels, shoots, and bud scales. As the scab spreads, it is most evident on young leaves as they begin to curl, twist, dwarf, and become deformed.

Scabs can be identified at first as small yellow or light brown areas on the undersides of leaves. As the scab progresses, the areas turn dark olive, brown, and black as cells die. Some leaves may be entirely covered with spots; leaves in this condition are often referred to as "sheet scab."

The fungus that causes apple scab (V. inaequalis) overwinters in infected trees, even in cold climates. Both home gardeners and commercial growers use a combination of treatment programs to control the disease. This includes choosing disease-resistant cultivars, sanitation (removal of leaves and dead fruit from around the tree at the end of the growing season), and chemical treatments. Organically acceptable treatments include fixed copper, Bordeaux mixtures, copper soaps, sulfur, and mineral or neem oils, according to the University of California Statewide Integrated Pest Management Program. 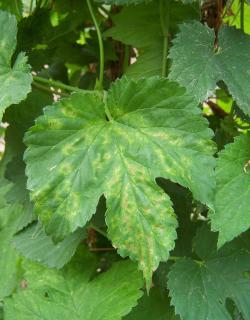 The apple mosaic virus is common in most apple tree varieties and is evident by yellow or cream-colored spots that appear on leaves in early spring. The spots become larger as the virus spreads. Once warm summer weather sets in, the leaves will turn brown and die. This virus is most prevalent in the 'Golden Delicious', 'Granny Smith', and 'Jonathan' varieties, causing the most damage on these trees.

The virus spreads by propagation or root grafting, according to studies conducted by WSU. While it is still possible to have a crop of apples after the virus has infected a tree, it may be diminished by half in affected trees. There is no known treatment once a tree has been infected, and the University of California recommends removing it entirely from the orchard. 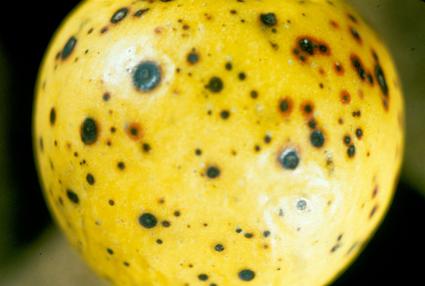 Black pox (Helminthosporium papulosum) is caused by a wet-weather fungus that overwinters in infected trees, forming conidium (spores) in lesions of old bark. Most common in warmer regions, the fungus is prevalent in the 'Rome Beauty' and 'Grimes Golden' varieties, according to the U. S. Cooperative Extensive System (eXtension.org). Black pox's prime growing temperature is 82°F, while its incubation period is three to six months on fruit. You can identify the fungus by black, shiny, cone-shaped lesions that form on new twig growth. Small black lesions also appear on the fruit and eventually will look sunken in. Leaves will show signs of the disease, first as red circles that will turn brown or purple.

If you harvest early in the season, black pox may spread after the last preharvest fungicide application to unprotected new trees and growth. The best treatment for this disease is sanitation and applying chemicals. At the end of the growing season, cleaning up leaves and fruit from the ground and applying a fungicide will help to eliminate the disease and stop it from spreading to nearby trees. Use disease-free planting stock to prevent the fungus from spreading. 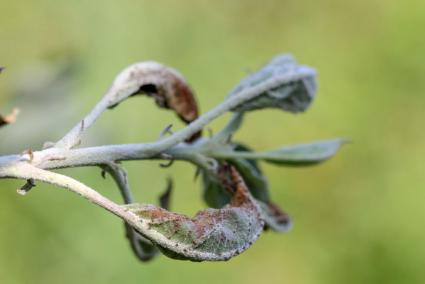 Powdery mildew (Podosphaera leucotricha) is a common disease that affects many types of plants in mild climates, including apple trees. While powdery mildew fungi usually need moisture to release overwintering spores that germinate and infect the tree, the fungi can establish and grow in dry, Mediterranean climates, according to the University of California Statewide Integrated Pest Management Program (UC IPM). Crinkled and curled leaves identify this disease in the spring, as well as a gray-white powder coating on the twigs, resulting in stunted twig growth.

Powdery mildew also overwinters inside the buds of infected trees. In spring, delayed bloom indicates the possibility of infection; when they do open, the buds are covered with powdery spores. Wind blows and spreads the spores, infecting new shoots, leaves, and fruit, according to the Pennsylvania State University Extension.

If left untreated, it will result in blossoms dropping prematurely and overall stunted growth of the tree. You can treat the disease by implementing a mildewcide program and by pruning whitened terminal shoots on the trees. 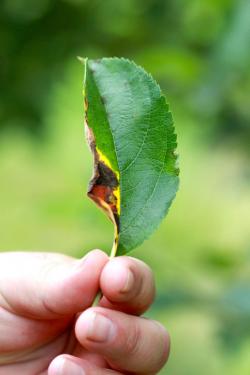 A close relative of cedar apple rust, hawthorn rust is caused by Gymnosporangium globosum. Like cedar apple, hawthorn rust requires two species for it to do its damage: apple trees (or other rosaceous species, like pear and quince), along with something in the Juniperus species. Another rust with similar life cycles to cedar apple and hawthorn rusts is quince rust (Gymnosporangium species, G. clavipes), which affects young branches and weakening cedars and junipers, with cankers appearing on their main trunks. Fruit infected with quince rust have dark green lesions at the calyx, which make the fruit distort and the pulp becomes brown and spongy.

The Missouri Botanical Garden recommends the following for managing rust: 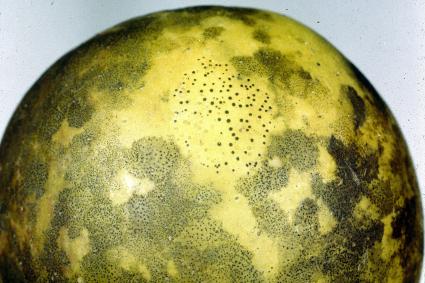 Both sooty blotch and flyspeck overwinter on twigs of apple trees, according to Penn State University Extension. Wind spreads spores throughout the orchard, with infection occurring after petal fall. Fortunately, sooty blotch and flyspeck are superficial (surface) diseases that do not cause rot, and trees will not be affected, according to University of Georgia Cooperative Extension (UCG).

To avoid these diseases, UGC recommends pruning to increase air circulation and also thinning out fruit. For affected apples on the tree, UGC advises applying a bleach solution (one ounce per gallon of water) with a cloth to remove rot; although that season's crop may be reduced. 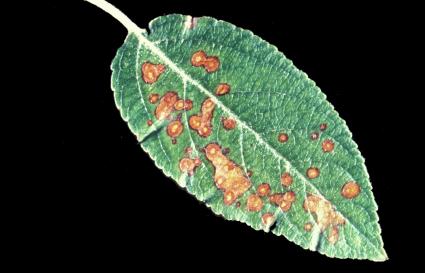 White rot (Botryosphaeria dothidea), or bot rot, is common in southern climates. The white rot only infects the fruit and wood, not the leaves. Infections occurring on limbs and twigs are identified by small circular spots and blisters. These spots will continue to enlarge during the growing season, eventually causing the bark of the tree to become orange in the affected areas and peel from the tree. In severe cases, the disease can cause girdling of the limbs and tree. Fruit rot will also occur, and you can identify it by the appearance of small, sunken in brown spots in light-skinned varieties. In red-skinned varieties, the spots appear as white or light brown in color.

Cankers, twigs, and dead bark are hosts to bot rot, which overwinters there and in nearby trees and wood, both dead and living. Spring and summer rains splash spores onto other parts of the tree and spread the infection, according to Penn State University Extension

The disease can be treated with chemicals and by pruning affected and dead wood each year. You should apply fungicide throughout the growing season, from bloom throughout harvest.

You can avoid apple tree diseases in many cases by selecting and planting healthy, disease-free rootstock. Iowa State University Extension and Outreach (ISU) also recommends burning plant material after removing dead leaves and rotting fruit, if your region allows it (check with local burning laws). Because many disease organisms survive in home compost piles, ISU also advises against composting when your garden has been affected by apple tree diseases. Keeping your garden maintained and practicing sanitation are important, whether you have one apple tree or an orchard.