Blight is the common term for any number of plant diseases typified by a spotted lesions on various parts of the plant, often in conjunction with wilting foliage and other deformities. Blights may be caused by fungal or bacterial pathogens and are not easily treated. 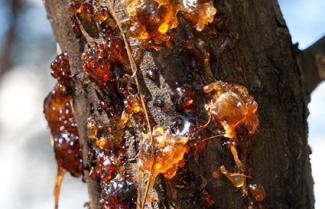 Caused by a soil-dwelling bacteria, this type of blight affects a great number of species, especially woody trees and shrubs. The bacteria invades the plant's tissue, often causing open lesions, and prevents the plant from transporting water and nutrients through its vascular system, eventually leading to death.

The visible symptoms of bacterial blight varies tremendously among species.

There are no natural or chemical sprays that effectively treat bacterial blight, meaning the only course of action is to manage the disease to minimize harm.

In general, bacterial blight is more common in wet, humid environments. It is spread to the plants when water, from rain or irrigation, hits the ground and splashes muddy droplets onto the plant containing the bacteria. Thus mulching the ground to prevent the splashing effect and avoiding overhead irrigation are two of the most helpful tricks to avoiding an outbreak of bacterial blight.

Once symptoms have been noted, it's important to cut off the infected portions of the plant and dispose of them immediately to prevent further spread. Once the disease has spread throughout the majority of the plant, it is unlikely to survive and should be removed so as not to spread the disease to other plants nearby.

There are several devastating fungal blights that attack tomatoes, some of which attack other species as well. 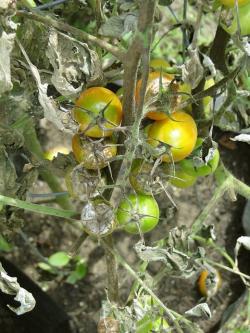 Early blight appears as pea- or dime-sized brown spots on the leaves that are lighter toward the center of the spot but exhibit a distinctive yellow border around the outer edge of the spot. The stems and fruits will develop dark, mushy spots as the disease progresses. Early blight typically starts to affect tomatoes in early summer.

Late blight shows up later in the summer and is apparent by brown edges on the leaves of the plants, rather than spots in the center of the leaf. It can progress to engulf entire leaves, stems, and fruits, with the infected areas becoming covered in mold as they die. Late blight affects other species in the tomato family as well, such as potatoes and petunias.

Septoria blight, also known as septoria leaf spot, causes small dark spots less than an 1/8-inch in diameter all over the leaf. Unlike the other two tomato blights, it doesn't affect the fruits or stems.

Various cultural practices limit the spread of tomato blights and chemical treatments can also be employed to salvage a crop. 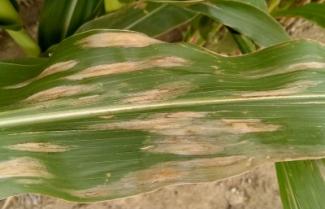 This fungal blight causes thin tan or brown streaks in the leaves of young corn plants and can weaken the plant but does not usually kill it. It is mostly a concern in agricultural settings though it can show up in home gardens.

The best way to avoid corn leaf blight is to plant resistant varieties and look for seed that is certified disease free. The blight overwinters in the crop residue, so be sure to dispose of decaying cornstalks and leaves at the end of the season. If the infestation is severe, consider planting corn in a different part of the garden for several years. 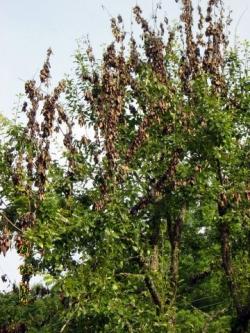 This bacterial disease is extremely common and can affect any member of the rose family, which includes apples, pear, peaches, strawberries, and many ornamental plants. It is most frequently a problem with apple and pear trees, however. In severe cases the affected plants may die.

The most telling symptom of fire blight is the sudden appearance of black or brown leaves and twigs at the tips of the branches -- they literally look as though they were singed by a fire. Other symptoms include twigs that appear deformed, growing with a downward hook-like pattern rather than splayed straight out. Lesions may also appear on the fruit, flowers and bark.

There are several ways to avoid and minimize the damage caused by fire blight.

Blights are fact of life for gardeners. Prevention and management are the keys to avoiding severe damage when there is an outbreak though minor degrees of blight can usually be tolerated.