Earwigs are common pests in the home and garden resembling a small elongated beetle. They occasionally cause severe damage to plants, but many people seek to limit their populations in the yard so they do not eventually spread to the house. 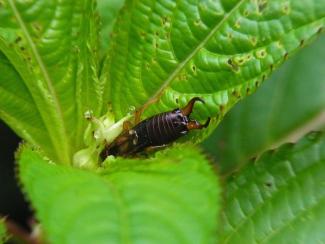 Earwigs are brown in color and no more than one inch long and a quarter inch wide. Their defining characteristic is a set of pinchers at the rear of the abdomen which, while not any real danger to humans, can give a startling pinch if one gets on your skin.

Earwigs hide out in dark, damp places during the day and come out at night to forage. Outdoors, their primary habitat is under rocks and mulch, inside crevices in walls and within almost any type of garden debris. They can also be found nesting in the crooks of trees and in the folds of large leafy plants.

The earwig is common in all regions of the United States. 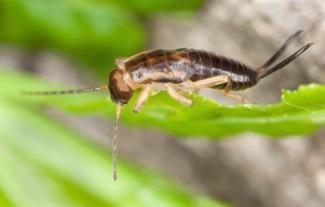 The earwig diet consists largely of decaying plant matter, but they will also feed on live plants, forming irregular patterns of missing vegetation on young tender leaves. They show a strong preference for plants with particularly succulent foliage, like dahlias, hostas, marigolds, and lettuce. Tiny seedlings can disappear completely overnight.

Earwig damage is easily confused with that of several other pests - namely, snails, slugs, leaf cutters, and rabbits. In the case of snails and slugs, the trail of slime they leave behind is a clue that earwigs are not the culprits. However, the sure way to find out if you have an earwig problem is to go out at night with flashlight and observe the plants that are being attacked.

Before getting too overzealous about killing earwigs, make sure that they are the cause of damage. Also realize that earwigs do prey on other pests at times, such as aphids, and should be viewed as part of the garden ecosystem - it's better to take steps to limit their numbers, rather than trying to completely eradicate them with insecticides.

Before resorting to chemicals, consider the following ways to reduce earwig numbers:

For insecticides to be effective on earwigs, they must come into contact with the insects. Plants can be sprayed or dusted with insecticide or the ground can be drenched with a liquid insecticide in the areas where earwigs are believed to be hiding. It is best to apply the insecticides in the late afternoon, so they will still be at their maximum potency in the evening when the insects emerge.

Permethrin, malathion, carbaryl, and pyrethrum are some of the insecticides suitable for use on earwigs. Always follow the directions on the product label when applying these chemicals. Before applying insecticides in the vicinity of food crops, check the label to be sure it is safe to do so or whether there is a waiting period necessary before the food is consumed.

Earwigs have a tough exoskeleton that makes them resistant to pesticides and are adept at hiding in the tiniest most out of the way places, making them a hard target to reach. No one likes it when they pick up something in the garden and an earwig suddenly wiggles across their skin, but fortunately their damage to gardens is often less of a concern.