Most gardeners understand the purpose of raised beds - to provide deep, fertile soil, and good drainage - but few take this idea to its full realization. The secret to doing so is by using the double digging method, also known as deep digging. Unlike what most gardeners imagine as a raised bed, it doesn't require wood, stone, or any other form of support on the sides.

Deep digging is an approach to organic gardening that was developed in the 1960s and 1970s by well-known California gardeners Alan Chadwick and John Jeavons as part of Biointensive philosophy of food production.

The basic premise of double digging is that the deeper the area of rich loose soil for crops to grow in, the more they will produce. Loose soil with ample organic matter promotes:

Most farmers and gardeners till their soil to a depth of no more than six or eight inches while the double digging method is geared to loosening the soil to a depth of 18 to 24 inches. The goal is also to avoid mixing the different layers of soil based on an understanding of soil science and the natural ways that healthy soil develops into distinct layers.

By preparing the soil as deeply as possible, the theory is that less surface area is needed to produce the same amount of a crop. Studies by Ecology Action, the main organization promoting the Biointensive approach to food production, support the idea that deep (or double) digging is the most fertile way to create a raised bed.

The University of Missouri Extension notes that double digging results in "an excellent rooting zone for plants". 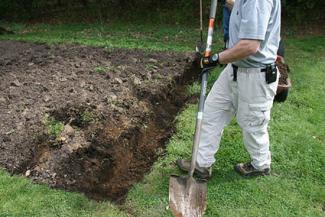 Double digging is a simple, systematic approach to making a raised bed. 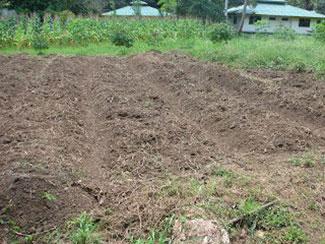 This process results in a raised bed that should remain extremely productive for years to come. Each year the top layer of soil will have to be gently loosened with a digging fork to plant the crop. Refresh the soil at this time with a thin layer of compost to replace the nutrients removed by the previous year's crop.

Every few years the entire process can be repeated as the lower layers will slowly become compacted again from the weight of the soil on top. One trick is to place a 2 by 12 plank across the row to stand on while working the soil of an existing double dug bed. This allows convenient access to the center of the bed without compacting the soil.

You can plant your double dug beds with anything you like - including flowers and other ornamental plants. If you want, however, you can plant according to the Biointensive method for a well-rounded diet, which suggests the raised bed area be divided according to the following ratios:

The Most Fertile Raised Bed Possible

Double digging is a labor intensive process, but it results in less work in the long term. You will need fewer beds to grow the same amount of food and only a light forking of the soil is needed each year to get the garden ready. Plus, the quantity and the quality of the produce are a worthwhile reward for the effort involved.

0
Comments
© 2006-2021 LoveToKnow, Corp., except where otherwise noted. All Rights Reserved.
The Secret to Building the Most Fertile Raised Garden Bed