Sycamores are a classic American shade tree. They are widely adapted and can be found gracing front yards and streetscapes from Seattle to Boston and from Atlanta to Los Angeles.

Sycamores are massive trees eventually reaching more than 100 feet in height with a broad, spreading crown. Healthy trees are known to live for hundreds of years and can attain an impressive girth of 10 feet or more in diameter.

The leaves are quite large, growing between 4 and 8 inches long and wide with three to five distinct points reminiscent of a maple leaf with numerous smaller serrated tips in between. In the fall, the leaves turn brown and bury the ground underneath the trees in a thick carpet. 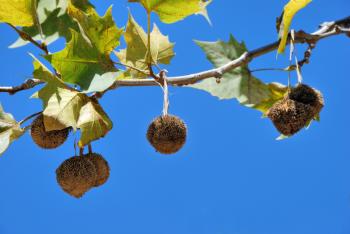 Sycamores are not known for their flowers, which appear on small green balls at the same time that the leaves emerge in spring. Their seeds are much more conspicuous, as they develop in spherical capsules about 1 inch in diameter and remain dangling from the branches long after the leaves drop in fall, like little ornaments. 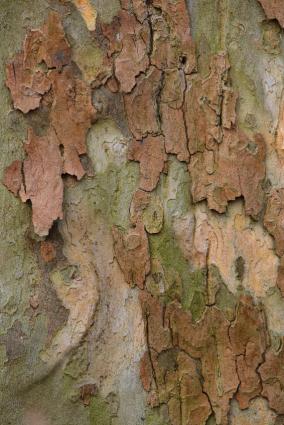 The aesthetic feature sycamores are most known for is their mottled, exfoliating bark. Sycamore bark has often been described as resembling desert camouflage with its patchwork of grey, brown, tan and whitish tones intermingling in a swirling pattern.

The bark also has the unique habit of continuously shedding itself in long strips, creating a striking appearance at ground level that makes it hard to mistake a sycamore for any other tree.

USDA plant hardiness zones 5 to 9 are where sycamores are most at home, meaning they will tolerate winter temperatures as low as -20 degrees and are comfortable in hot climates, other than in desert areas. 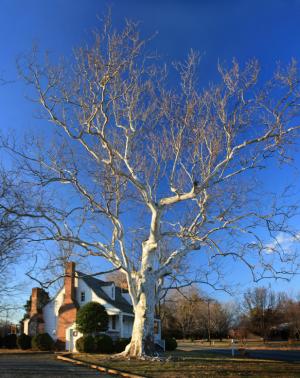 Once a sycamore tree is established, generally within 5 to 6 years after planting, it is unlikely to need much attention. However, the more it is pampered when young, the more likely it is to reach adulthood in good health.

Numerous pests and diseases prey on sycamores, which can shorten the life of this otherwise long-lived tree. In general, the size of the trees makes treating any problems that occur a job for a professional arborist.

Providing ample irrigation and cultivating deep, rich topsoil around sycamore trees is the best prevention for the many maladies that can affect them. Tree suffering from drought stress are particularly vulnerable.

Broken branches and split trunks are a sign that the tree developed with an improper branch structure. With trees the size of sycamores, this a serious concern, as life and property are at stake if a large branch comes crashing down. In this case, there is nothing a homeowner can do, but it is wise to consult with an arborist to see what steps can be taken to shore up a tree with a weak structure and prevent future calamity.

Sycamores are also known by the name of buttonwood tree or plane tree. There are a handful of species native to North America, Asia and Europe, though they all bear a fairly common resemblance.

A hybrid form of sycamore, called the London plane tree, is by far the most widely planted variety and is known for its excellent tolerance of smog and other environmental conditions common in urban areas. There are several named varieties of the London plane tree available:

Planting a sycamore is something that needs to be considered carefully. Will it have the space and the growing conditions it needs to thrive? If not, it can be a messy disease-ridden tree. However, if you have a moist open area and would like the satisfaction of planting something that will give shade to future generations, it is a beautiful, stately species to choose.