Look for signs of a dying tree in the following areas:

Evergreen trees will start to show red or brown needles. Once the top third of the plant has needles that are red or brown, the tree is definitely dying. Trees showing yellow needles are stressed and may be dying.

When branches lose their bark, those branches are dead. A branch that is starting to lose its bark is dying. In extreme cases, branches will break off when dead. When too many of the branches break off, the tree will die. Note that some trees, such as pecan trees, are self-pruning and the lower branches will fall off when nothing is wrong with the tree.

Fungus may grow on dead branches. It only grows on decaying wood, so whatever portion of the branch it is on is dead. Wood boring insects will also move in when a tree is dying. Branches start showing holes where the insects have made homes or bored holes to eat the wood. 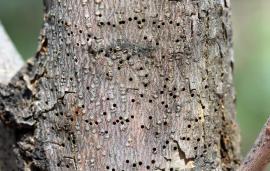 Bark will become loose and start falling off a dying tree. It may sport fungus or holes where wood-boring insects have made homes in it. Brittle bark is also a bad sign. Bark beetles indicate dying bark. 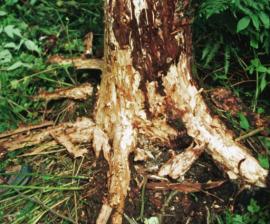 Roots may turn slimy when a tree is dying. They may host fungus and insects such as boring insects and carpenter ants. They may become brittle and break, allowing the tree to fall over. They may also show knots in their fine fibers.

If you believe your tree is sick or dying, you need to have a certified arborist come out and inspect the tree. The arborist can tell you if the tree is sick, what is wrong, and if it can be treated or the tree needs to be removed. An arborist has more education than someone who is simply a tree trimmer and is more able to diagnose and treat trees.

0
Comments
© 2006-2021 LoveToKnow, Corp., except where otherwise noted. All Rights Reserved.
Signs That a Tree Is Dying