Hawthorns belong in a very large family encompassing over 1,000 types, though all have similar characteristics and all produce attractive fruit. Despite their susceptibility to pests and diseases, they fulfill many uses within the landscape.

Since the different varieties closely resemble each other, it's hard to distinguish one from the other. The vast majority of types have branches covered in thorns, which range from under and inch to 3 inches long and all produce pome fruits. Though classified as small trees, they have a tendency to send up suckers, which leads to multiple trunks or creates a large shrub if not pruned. They average between 15 and 30 feet tall and wide. The small trees have a slow to moderate rate of growth.

One drawback to growing them, other than the thorny branches, is they are prone to a variety of diseases and pest problems.

Alternate foliage is usually serrated, wedge-shaped, oblong or round, depending on type and glossy green in springtime and depending on the variety, changes to orange-red during fall. All types of hawthorn are deciduous, dropping their leaves during winter. 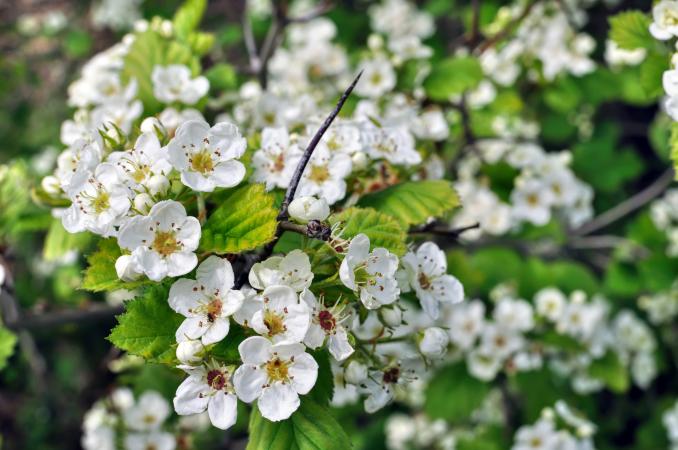 Depending on the variety, hawthorns bloom in early spring to late summer, typically covered in small white flowers that generally have a pungent smell. They are members of the rose family and their flowers resemble miniature roses. However, some hybrid cultivars produce rose or pinkish flowers. Plants are profuse bloomers, with flowers covering the tree.

All varieties produce small clusters of reddish-to-black berrylike fruits, technically classified as pomes, forming several months after flowering. Unripe fruit is green. Depending on the specific variety, fruits form in late springtime throughout early autumn and persist on the plant for several months. Some common names for the fruits include haws and thorn-apple.

Fruit size ranges from approximately 1/2 inch to approximately 1 inch in diameter, depending on type, and resembles a cranberry or crabapple in looks and taste. Many types are juicy with an acidic taste, and each fruit contains several seeds prized by various species of birds. Though berries are edible, many types taste better than others do, with varieties such as May and Western used to make wine, condiments, desserts and preserves, usually in local markets where the plant grows. However, the largest consumers of the berries are rabbits, squirrels, raccoons, deer and small rodents.

Before harvesting, wait until the fruit achieves its full color and is ripe. You can hand pick the fruits, placing them in a container as you go, but that is a time-consuming process. An easier way to harvest a large amount of fruits at one time is to spread a tarp or sheet under the tree's canopy and then shaking it. The ripe fruits will fall on the cover while the unripe fruit remains on the tree.

The many varieties are too numerous to name, but a few examples include the following trees. 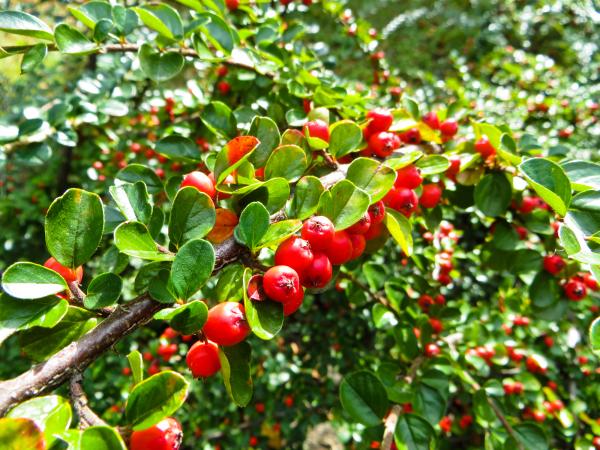 Western hawthorn (Crataegus opaca), also called mayhaw, is another edible pome-producing native used for making jams and syrup. It grows as a small, deciduous and thornless tree reaching about 30 feet tall and wide at maturity, with 2 inch green foliage with smooth edges. White flowers bloom in spring, followed by the 1-inch red pomes ripening in May. It is hardy in USDA zones 7 through 9 and has a good resistance to disease.

May hawthorn (Crataegus aestivalis), also called apple hawthorn, is a deciduous, native variety prized for the jelly produced from its 1-inch red pomes ripening in May. Some cultivars don't have thorns. It grows as a small tree, reaching approximately 30 feet tall and wide at maturity, producing white blossoms in early spring. Green, oval foliage averages 2 inches long and doesn't change color in fall. The tree is hardy in USDA zones 6 through 11 and has a good resistance to disease. 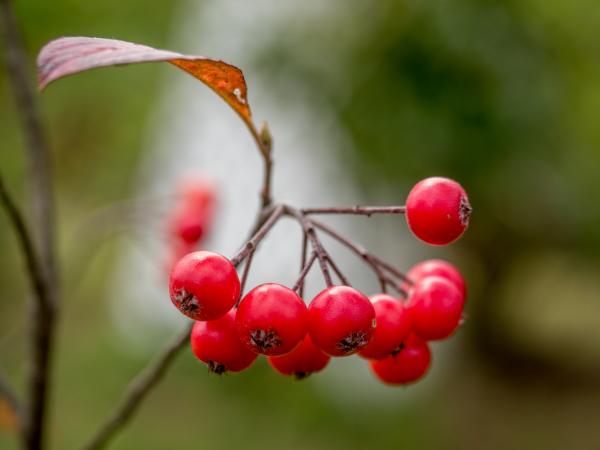 Washington hawthorn (Crataegus phaenopyrum) is a native, deciduous small tree averaging 20 feet tall and wide at maturity. White flowers cover the tree during the first part of summer, followed by clusters of 1/2-inch reddish-orange fruits in autumn prized by wildlife. Green serrated and lobed foliage average 3 inches long, changes to orange-red in fall. It has 1- to 3-inch thorns covering the branches, and it's prone to a variety of diseases and pests. It is hardy in USDA zones 3 through 8.

Black hawthorn (Crataegus douglasii) is a native, small deciduous tree averaging 30 feet tall and wide at maturity. It's green serrated and oblong foliage averages 3 inches long and changes to orange-red in fall. Thorns ranging from 1/2 to 1 inch long cover the branches. White flowers cover the plant in early summer, followed by clusters of 1/2-inch purple-black berries ripening in early fall. It is hardy in USDA zones 2 through 7. It is not as prone to insects and diseases as other varieties. 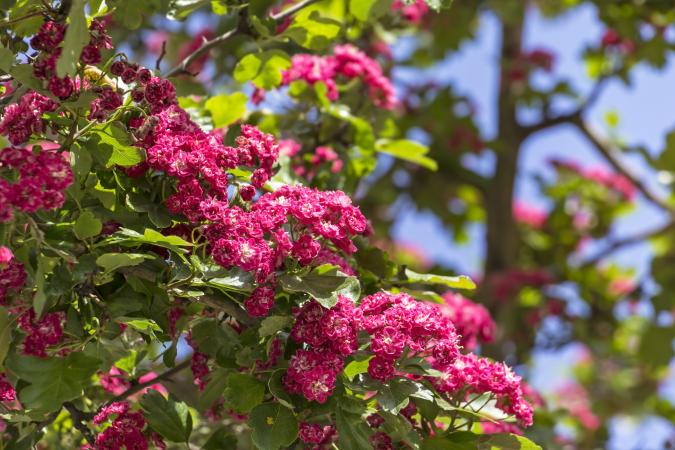 English hawthorn (Crataegus laevigata) averages 20 feet tall and wide at maturity and unlike many others in the family, it retains its green foliage until it drops in winter. One-inch thorns cover the branches and in late spring, flowers form ranging in colors of white, pink or rose, depending on the cultivar, followed by 1/2-inch red berries in early fall prized by wildlife. This variety is susceptible to a host of diseases and pests. It is hardy in USDA zones 4 through 8.

Hawthorns have various uses in the landscape, though gardeners should consider their thorns when selecting a location or plant a thornless variety. Due to their thorny nature, you probably don't want to plant one close to walkways or entranceways. 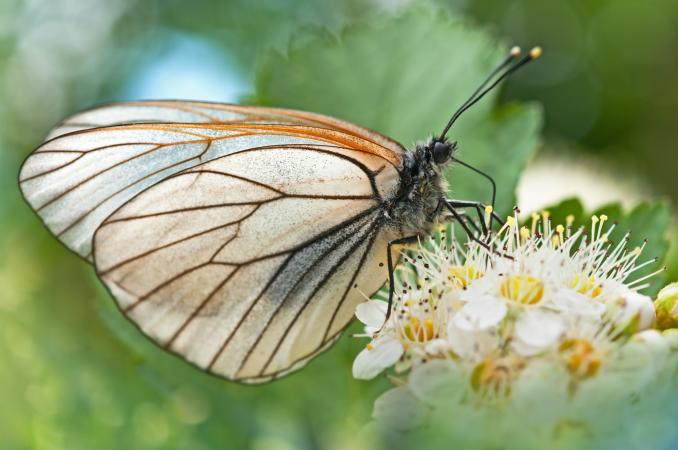 With their canopy's busting into a massive amount of blooms, use the small tree as a specimen where the flowers, berries and fall color can put on a show. They also work well in pollinator and butterfly gardens because the flowers attract beneficial insects to the garden.

The trees also work well in native or wildlife gardens, providing shelter and food for local species of mammals and birds. If left unpruned, the trees work well used as hedges or screening plants, and if pruned to have one main trunk, they work well as small shade trees.

Since many grow naturally around stream banks, they can be planted around ponds in the home landscape. Due to their thorns, you probably don't want to use them around pool areas.

Even though the majority of them are prone to various problems, they are hardy trees that perform well in a variety of conditions. When planting a nursery-purchased tree, you should plant the root ball at the same depth that it was growing inside its container. Planting too deep puts undo stress on the tree.

If adding several trees into the landscape, allow approximately 15 to 20 feet between multiple plants to promote healthy and unobstructed growth. Planting multiple plants too closely also cuts down on air circulation, which opens the hawthorn up to pest and disease problems.

Plant them with the following requirements in mind.

Gardeners can propagate new plants through grafting, planting seeds or softwood cuttings, though seeding and cuttings are the easiest route to take.

Propagation through cuttings assures a quicker production of fruit, which happens in approximately two years. The process is fairly simple.

The biggest care requirement for these trees is proper pruning to develop a strong structure and appropriate amounts of fertilizer for abundant growth and production of fruits.

Apply 1 pound of fertilizer for each inch of the trunk's diameter split into two applications throughout the year. When applying, use half the total amount of fertilizer needed in the first application in February and the other half in late summer. Use a 5-10-10 slow-release blend and do not overfertilize or use too much nitrogen as it promotes fire blight.

To create a strong structure, select the strongest and the healthiest central branch and trim off all the others at ground level. Over time, the plant will continue to send up additional water sprouts or suckers and it's best to keep them trimmed off as they sprout.

The trees have a tendency to develop an open canopy as they mature, so it's best to trim away any branches growing too close together to promote proper circulation of air. This also helps cut down on pest and disease problems. Trim off any dead, damaged, diseased or crossing branches anytime throughout the year. Otherwise, wait until the plant is dormant during winter to do any major pruning or shaping.

Gardeners should inspect their plants on a regular basis, checking for potential pest problems. Some pests only cause cosmetic problems warranting no control while other pests need treating before populations grow out of control. 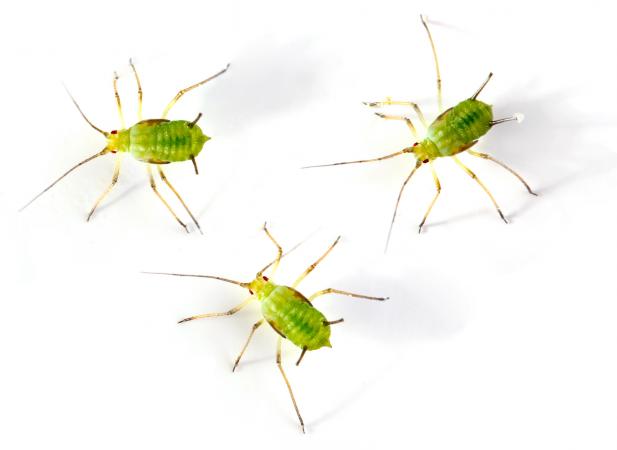 Hawthorns are susceptible to various sap-sucking insects such as spider mites, aphids, lacebugs, and scales. A close inspection should note insects on the underside of the plant's foliage or congregating along the fresh stems. Sapsuckers suck juices from the plant causing distorted leaves and discoloration. As they secrete a sweet substance called honeydew, the black-colored fungus sooty mold forms covering the leaves, which is cosmetic.

Many times and when populations are small, spraying with a strong blast of water dislodges the pests from the plant. Predatory insects such as ladybugs and predatory wasps prey on the insects killing them, so there's no need for further control.

If populations rise, gardeners can use an insecticidal soap spray, which is a friendlier option to beneficial pollinators, to control aphids, lacebugs and spider mites. Saturate the infested foliage with the insecticide and reapply weekly, if needed.

Scale insects generally congregate along fresh new stems. If the infestation is small, gardeners can scrape the insects from the stem. In the event of a large infestation, spray the affected area with horticultural oil, reapplying weekly, if needed.

Leafminers are the larvae of the sawfly which overwinters in the soil beneath the pland the larvae usually appears in late spring. Damage is usually only cosmetic and doesn't warrant control, showing up as leaf blotches or holes eaten in foliage.

The first course of action gardeners can take in the prevention of disease problems is keeping the area underneath the plant clean of fallen leaf debris and fruit. Regularly inspecting plants, helps control potential problems before they get out of hand.

The trees are susceptible to a variety of rust problems, including cedar-quince rust and cedar-hawthorn rust. The rusts cause premature leaf drop and orange-yellow rust spots cover the plant's foliage. Both types of rust affect the fruit, causing rust spots and deformation.

Control rust problems by not planting the tree by junipers, which is a host to the rust fungus and spraying with a copper fungicide when the problem first shows. Reapply the fungicide every 10 days to two weeks.

Leaf blight, fruit rot, and fire blight are common problems of these plants, with fire blight being the most serious. Fire blight symptoms include the tips of branches browning, which then travels to the foliage and flowers killing them, but both remain on the tree. Sunken cankers form along the branches. Control fire blight by not planting the trees near apples or pear trees, which are hosts to the problem and don't overfertilize with nitrogen to promote excessive growth. Use sterilized pruning tools to prune off affected branches at least a foot into healthy wood while the tree is dormant and keep suckers pruned off at the ground.

Leaf blight and fruit rot are most problematic during springtime, causing the foliage to wilt and turn brown along with the fruit. The best prevention is keeping the area under the tree clean of all fallen fruit and leaf debris.

Even with their potential for problems, hawthorns add charm and color to gardens, with the bonus of bearing fruit. People have been utilizing the fruits for centuries in herbal medicines as well as adding their unique flavor to a host of culinary dishes.