If you desire a handsome shade tree for your landscape, then look no further than an ash tree (Fraxinus spp.). The deciduous and stately trees fill with spectacular color during the fall, with the foliage turning shades of gold, purple, red or orange. Given enough space to branch out and reach its full potential, this tree makes an attractive specimen.

All ash trees are relative to olive trees, and belong in the family Oleaceae and have distinguishing characteristics that make them easily identified. All types have opposite branches, which many trees don't, and compound leaves. They are dioecious, meaning the tree has male and female portions on the flowers, with each found on separate trees. For a female ash to produce the characteristic winged seeds there must be a male tree in the vicinity for pollination.

Gardeners are most likely to find young specimens ranging around a year old and 2 to 5 feet tall in local garden centers and native plant nurseries. All have similar growth requirements, but each has different characteristics setting them apart from the other. Willis Orchard Co. offers ash trees for sale. 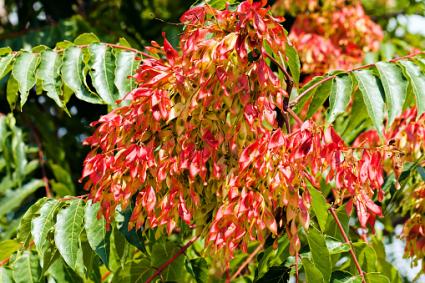 Growing quickly up to 80 feet tall and hardy in USDA zones 3 through 9, white ash (Fraxinus americana) trees are native to the Eastern U.S. It is the largest of the native ash trees and has a distinctive straight trunk with grayish bark, and at maturity forms into a roundish crown. Purplish to green flowers appear in spring before the foliage appears and give way to clusters of winged seeds that ripen during fall. During autumn, the foliage changes color to yellow and then to purple-red, making it a colorful landscape addition. The underside of the leaves has a whitish color. 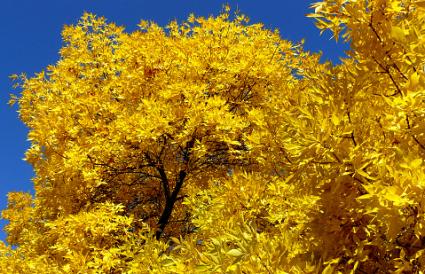 Hardy in USDA zones 3 through 9 and native to the U.S., green ash (Fraxinus pennsylvanica) grows quickly up to 70 feet tall. The tree is often mistaken for white ash trees due to their similar appearance. The main difference is that the flowers appear in spring after the foliage and the undersides of the leaves are green. As the tree matures, it develops a rounded crown and adds fall color with the foliage turning yellow. 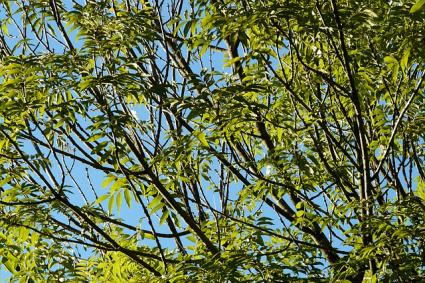 Black ash (Fraxinus nigra) trees are native to northern portions of the Eastern U.S., hardy in USDA zones 3 through 9, and grow slower than green and white ash trees. Smaller at maturity than its green and white relatives, the tree grows about 60 feet tall at maturity developing a rounded crown with green foliage, both on its top and underside. It tolerates wetter conditions than the other two ash types though all types tolerate moist and well-drained conditions. Foliage develops later and usually appears in late spring followed by flowers and the winged seeds in the fall. Black ash wood is softer than that of the green and white types, but has commercial woodworking uses as the other two. During fall, the foliage turns yellow.

All ash trees thrive growing in similar conditions and prefer a sunny location in the landscape, with black ash trees being the least tolerant of shade. Each type grows best in rich, well-drained soils kept moist, though once they establish themselves, they tolerate dry conditions, with white ash trees having the most tolerance to drought and black ash trees having the least tolerance. Keeping the soil moist through regular watering produces the best performance.

Each type of ash tree has a spread similar to its height, so when selecting its permanent site in the landscape consider its mature size. You want to choose a location allowing the tree to develop into its full size without any obstructions from a structure or other trees. This also allows the tree to put on a showier display, which makes it a specimen that stands out especially in the fall when it puts on its colorful display of autumn foliage.

When planting, plant no deeper than the tree was originally growing inside its container. Planting too deep puts stress on the tree and can lead to its decline. All ash trees are susceptible to wind damage. Therefore, plant the tree in low-wind areas where fallen branches won't damage structures.

Ash trees fulfill a variety of needs within the landscape from a large shade tree to street tree. They also make suitable additions to wildlife and native gardens as various species of birds eat the seeds. Remember, the trees are deciduous so you will have to deal with fallen leaves in winter, as well as dropped seeds, so you might consider planting the trees where they won't make a mess.

When properly maintained, planted, and cared for, ash trees are handsome landscape additions. To keep the soil moist and cut down on unwanted weed growth, install approximately 4 inches of an organic mulch around the planting site, being sure to keep it several inches from the trunk or it can lead to disease. This also helps maintain a barrier around the tree which cuts down on injuries due to lawn equipment bumping into the tree and injuring the trunk that opens up wounds for pest infestations.

Ash trees do not require heavy feedings throughout the year, but an annual application in fall helps the tree to maintain healthy growth, which cuts down on potential problems. Use an all-purpose tree fertilizer such as a 10-10-10 and apply according to package directions under the tree's canopy. Spread the fertilizer evenly over the planting site, being sure not to butt the product against the trunk and water it well into the soil.

Do major corrective pruning to develop a strong structure and form in young ash trees in the fall. Wind and heavy ice can damage the limbs, which require removing. You will also want to prune off any suckers, cutting them off flush to the trunk, as well as any dead, damaged or crossing branches. Prune off damaged or dead branches anytime throughout the year. Always make your cuts just above dead portions and into the living wood, cutting the dead section completely off the tree.

Ash trees are susceptible to a wide range of pests and disease problems, however, many of these problems do not require treatment, as they will not kill the tree. Some diseases and pests lead to the tree's decline and death. 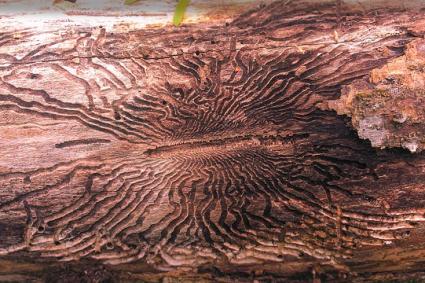 In northern portions of the tree's range and the Midwest, the emerald ash borer is the deadliest pest attacking the tree. Since the destructive wood-borer infests and kills healthy ash trees, gardeners living in these regions might not want to add an ash tree to their landscapes as there is no treatment once the tree is infected and it requires removing.

Signs of an emerald ash borer infestation include a decline in the tree's health showing up as dying branches and the canopy. The beetle takes up residence under the bark creating winding tunnels, holes in the trunk that are D-shaped, suckers sprouting from the trunk beneath the borer's activity and during the fall, white worm-like larvae feed beneath the trunk's bark. 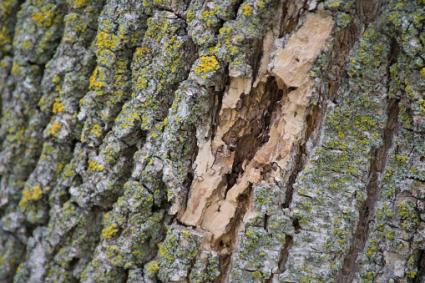 Ash trees are susceptible to other types of wood borers, but unlike the emerald ash borer, which attacks healthy trees, other borers only attack stressed or damaged trees. Since insecticides do not provide appropriate control, prevent the problem by keeping the ash tree healthy by planting in an appropriate location, water as required and do not damage the bark with lawn equipment.

Aphids, galls, and scales can be problematic to ash trees; however, aphids and galls only create cosmetic damage and do not require an insecticidal treatment. If scales become a problem, treat the infected area weekly with a horticultural oil or insecticidal soap.

Ash trees are susceptible to diseases such as verticillium wilt, anthracnose, rust and ash decline, which can cause a thinning of the tree's canopy and branches to die. Ash rust shows up as reddish spots on the foliage and no treatment is required. Trees infected with anthracnose have distorted foliage with brown circular spots and the leaves may fall in springtime followed by a new flush about a month later. No treatment is required for anthracnose. Verticillium wilt is deadly to ash trees and causes the tree to decline and eventually die requiring its removal from the landscape.

Gardeners living in the southern portions of the ash tree's range will experience fewer problems growing this handsome but potentially fussy tree than their northern neighbors. In areas where the emerald ash borer isn't a problem, the tree offers a variety of uses and brightens the landscape with color during the bleak days of fall when other plants have finished for the year.