Chances are you're probably well-acquainted with the idea of birthstones, but you might not know that there's also an expansive list of birth flowers, with the December birth flower encompassing three separate plants: narcissus, poinsettia, and holly. There's no better way to ring in the winter-time than to learn a little more about these wonderfully unique, wintry flowers and how they came to represent the last month of the year.

The narcissus genus actually belongs to the amaryllis family and describes a large number of small, colorful plants. Much in the same way that every square is a rectangle but not every rectangle is a square, every dandelion flower is also considered a part of the narcissus genus, which explains why the two plants share such a similar resemblance. These lovely little plants are defined by their (most often) white or yellow petals and trumpet-shaped corona poking forward at the bloom's center. Interestingly, there's no agreed upon number of species of narcissus, but all of them are known to be incredibly - some would say nauseatingly - fragrant, and the saps they secret can be harmful to human skin. Yet, they've come to be associated with friendship and happiness, making these flowers perfect for brightening both your day and the day of one of your best friends as well. 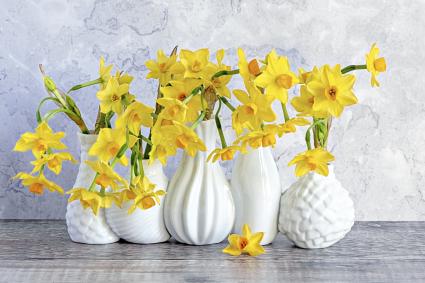 According to Greek mythology, a nymph was rejected by a beautiful man named Narcissus, and in return for this rejection, the goddess Nemesis cursed him to become so entranced by his own reflection that he wouldn't be able to look away, not for hunger, slumber, or thirst. Unfortunately for Narcissus, he was so taken by his reflection in a nearby stream that he accidentally drowned after growing tired enough to slump into the rolling river. It's said that the narcissus flowers which grow in abundance around riverbanks and streams do so in reflection of Narcissus' act.

The wide-blooming, deep-red Poinsettias are intimately associated with Christmas, with many department stores, neighborhood blocks, and community centers becoming covered in small pots of these plants during the winter season. The historical record points to poinsettia's first important contact with humans when the Aztec culture plucked these plants out of the snowdrifts and crushed them to create a purple dye. Once these plants eventually migrated to North America, and people began taking notice of their wintry blooming period, they became associated with the winter holidays. Due to this jovial connection, poinsettias are believed to embody feelings of cheer and merriment. 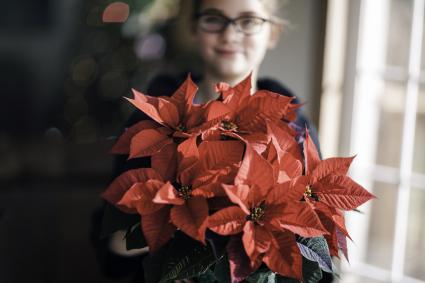 Often mistaken for mistletoe, holly actually describes an evergreen bush whose thorny leaves make it particularly resilient to creatures and critters that might want to feast upon its bright red berries. As with the poinsettia, holly bushes have their most mature period during the winter, though not all of them produce berries. In fact, hollies have male and female functioning plants, meaning that female hollies produce berries and only do so when placed nearby a male holly. Historically, this plant has significant ties to the Druid culture and was viewed as a symbol of eternal life and fertility, with there being some records of people cutting down sprigs of these plants and placing them inside their homes to ward against evil spirits. Perhaps this is where the tradition of hanging a holly sprig in the house during the winter months actually came from. 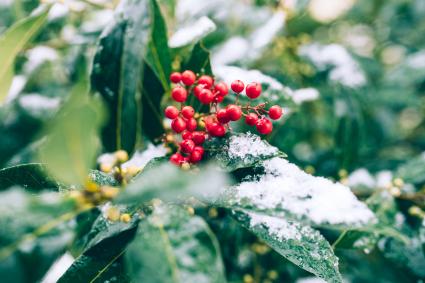 Unsurprisingly, all of these floras have distinctive connections to the Christian religion. It's unsurprising that each of these plants would come to be representative of the month in which the most important figure within Christian theology was born; presumably, this is where the links between each of the three plants and the month of December originate. Specifically, narcissus plants are said to the first flower that bloomed to comfort Jesus Christ on the night of the Last Supper when he knew that he was going to be betrayed by his apostle, Judas, and face imminent death. In addition, the poinsettia's ability to bloom in the greatest adversity (the cold temperatures of winter) connects to Christian themes of perseverance; and lastly, the holly has been adopted by Christian theologians to represent Christianity in a three-fold capacity. The sharp leaves are said to embody the thorns worn by Jesus Christ on the day of his crucifixion, the berries to embody his blood that was spilled, and the evergreen leaves to embody the eternal life promised to those who believe in Jesus Christ's salvation.

When Cold Days Give Way to Cheer and Merriment

Aside from their Christian connections, the unifying theme of all of these plants is the sense of celebration and merriment that they bring to whatever household they're residing in. Whether it be in the way narcissus' encourages you to deepen your friendships or the way poinsettias mark the coming holiday cheer, all of December's birth flowers help you bring the year to a close in a bright way, serving to contrast the dark, cold winter that's creeps ahead.