Pyracantha, also known as firethorn, is a tough evergreen shrub known for its decorative berries that ripen in fall and persist on the plants throughout the winter. It is a thorny shrub, but still a very popular hedge plant, and is useful where an impenetrable barrier is needed.

Due to their thorns, pyracanthas aren't shrubs you want to tangle with, but in the right context they are an attractive, carefree landscaping plant. 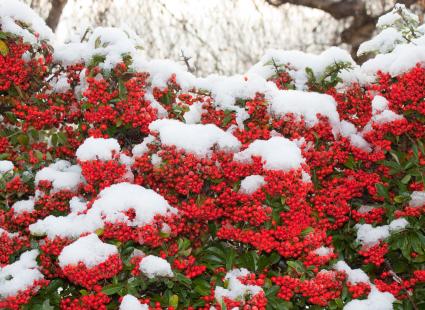 Pyracanthas are best planted in the fall when the weather is cool, but they are tough enough to risk planting any time of year, if necessary.

They are equally cold hardy and heat tolerant, making them widely adapted across most of the country, and will grow in poor sandy soil, as well as heavy clay, as long as it is well-drained. Sun or partial shade is fine.

Water pyracanthas weekly in their first year, but afterwards they only need water during droughts of a month a more.

Most varieties of pyracantha, especially the taller ones, want to grow into an upright vase-shaped shrub. To encourage this, select a few main stems and remove other suckers, which are new sprouts from the base, as they appear. This is a good technique where the shrubs are trained against a wall, as their branches will arch gracefully downwards when they are laden with fruit. It's still a good idea, however, to cut them back about 25 percent each winter to keep the growth compact and uniform.

Alternatively, you can shear pyracanthas into a formal hedge, which is more appropriate with the shorter varieties. Shearing should be done about every two weeks during the growing season to keep the hedge looking its best. There will be less flowering and fruiting with this technique, however.

Fire blight and scab are the two most serious problems that pyracanthas face; both can be lethal. There are resistant varieties available, but it's also helpful to avoid over watering and fertilizing pyracanthas, as this makes them more susceptible. In general, pyracanthas are adapted to low soil fertility and are healthier and fruit more abundantly without fertilizer.

Another challenge with pyracantha is the hazard that the thorns present to people. They are long and sharp and can make pruning really difficult - definitely a chore that requires gloves. You also want to think carefully about where you place the plants for this reason. Avoid planting them where children play or where the branches will overhang a path or patio area, for example.

Though pyracantha berries are good forage for wildlife, they can cause intestinal distress to children and pets. They are extremely unpalatable, however, so actual cases of poisoning are rare.

Variety selection is important with pyracanthas to make sure you end up with a healthy plant that performs in a way you're happy with. 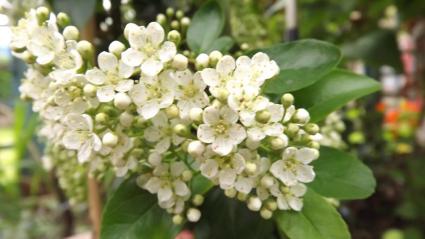 Beside their toughness and beauty, one of the top reasons for planting pyracantha is to provide wildlife habitat. The dense, thorny foliage is a great place to for birds and other critters to nest or just hide out when predators are near and the berries are a valuable winter food source at a time when other wild foods are scarce.