You can grow one or two chamomile varieties, Roman or German. Both are grown commercially for tea, tinctures, cosmetics, and various medicinal purposes. Both chamomile varieties have the same growing requirements and are valuable additions to your herb garden.

Chamomile is a no fuss herb that doesn't require a lot of maintenance and care. It is highly adaptive to its environment. If you have a section of your garden where the soil isn't as fertile as other areas, chamomile will make itself right at home and thrive in doing so. You can grow this valuable herb in hardiness zones 4-9.

Planting Tips for How to Grow Chamomile

You can grow seedlings indoors and then transplant in the spring after the danger of frost has passed. If you're transplanting seedlings you grew from seeds or plants purchased from a grower, you need to plant them about 3" deep or the depth of the growing pot. Dig the holes about 8" apart to allow space for the plants to grow.

Chamomile prefers well-drained soil that is slightly sandy but can grow in almost any type of soil. It doesn't require nutrient rich soil and adapts to most soil pH. It's capable of thriving in 5.6-7.5 pH levels.

Chamomile is drought tolerant and doesn't require a great deal of watering. You can water it when the first couple of inches of soil dries out. Avoid waiting until the foliage droops since it places undue stress on the plant. Regular watering with a slow flow drip system will keep the plants happy and producing flowers.

While chamomile can tolerate some heat, it prefers cooler weather. This herb needs a minimum of six hours of sun and prefers full sun. In warmer climates, you can plant chamomile on the east side of your garden to take advantage of the morning sun and late afternoon shade for a happy garden environment.

Chamomile doesn't require fertlizer. However, if you're working with poor soil quality, you can add fertilizer when the first blooms appear. Too much fertilizer will cause the plant to become leggy and produce few blossoms, so be stingy with the initial application.

If the production of flowers begins to slow down and your plants grow spindly, it's time to prune. You can cut the mass back, leaving about 4"-5" of growth. This will stimulate new growth and a second wave of blooms.

7. Regular Trimming and Harvesting of Blooms

You can harvest flowers for teas and medicinal tinctures and other purposes. Harvest newly opened flowers to ensure you capture the most powerful properties chamomile has to offer. Deadhead the plants regularly to encourage continued blooming.

Roman chamomile (Chamaemelum nobile) is often called English chamomile and true chamomile. This 3"-4" high perennial is often used as a ground cover. When you walk on its flowered mat, an apple/pineapple aromatic scent is released. Its flowers resemble a miniature daisy with ½"-1" white petals radiating from a yellow center to create a beautiful and profuse summer cover over the feathery fernlike plants. 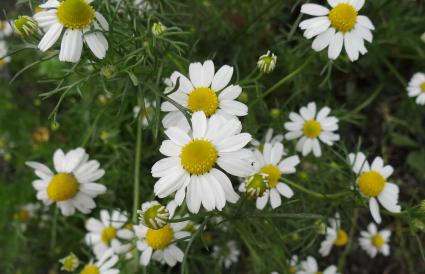 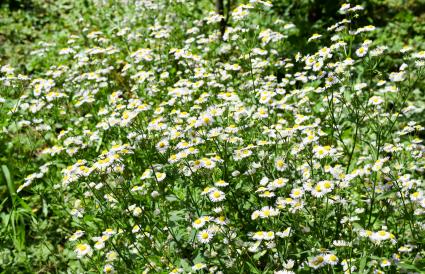 Discover How Easy It Is to Grow Chamomile

Chamomile is a drought tolerant herb that can grow almost anywhere. This makes it a valuable plant for any garden, especially for garden areas with poor soil.