Deciding when it is too late to plant a garden requires a little math. Each plant has a number of days from the time the seed is planted to the time the plant will bear vegetables or flowers.

The majority of annual flower seeds are planted in April for spring and summer blooming that will go into the fall for some varieties.

You can always transplant annual flowers during the summer growing season as long as you fertilize and water during the hot summer days. The flower display won't be as profuse as ones planted in the spring, but they'll be blooming until the first frost. 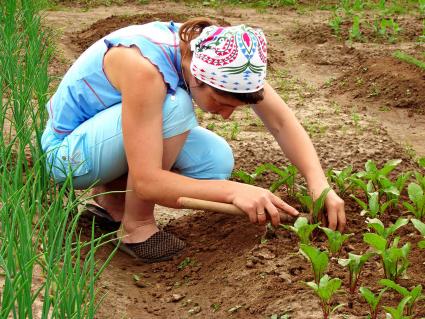 Some short growing cycles for vegetables that you may want to sow in a late vegetable garden include:

You can take the maturation day number and apply it to the calendar, starting with the day you'll plant the seeds.

Once you know how many days the maturation period is, you need to review the USDA Hardiness Zone Map to find the first frost date for your zone. This approximate date (usually a week time frame) will give you a timeline to use in determining if you have enough time to plant the seeds and produce enough vegetables to harvest. You'll want the minimum of a week to harvest a few vegetables. Longer means a bigger harvest.

If the plant takes longer than the calculated time frame needed to grow and harvest, then it's too late to plant. You're better off to start planning for next year's garden.

If you're planting a 50-day maturation cucumber, then simply walk back the date from the expected first frost to find the latest time you can plant seeds. You'll need to know your USDA Hardiness Zone to find your region's frost dates (first and last).

Zone 3 growing season is roughly between May 15 (last frost) and September 15 (first frost). This only gives a four-month growing season. It's best to plant seeds and transplants as soon as possible.

The growing season for Zone 4 is from May 15 - June 1 (last frost) to September 15 - October 1 (first frost). The same planting times for Zone 3 can apply to this zone since the first frost could come as early as September.

The Zone 5 growing season is typically from May 15 (last frost) to October 15 (first frost). There is the possibility of a second garden harvest if you plant no later than June 15. You certainly can have a cool weather garden in until the first frost, such as lettuce, carrots, radishes, beets and Brussels sprouts.

The growing season for Zone 6 is typically from April 1 - 15 (last frost) to October 15 - 30 (first frost). This can provide two growing seasons. Plant your second garden no later than the second week in July to reap a moderate harvest. A second garden planted in June should provide an abundant harvest until the first frost.

The growing season for Zone 7 is mid-April (last frost) to mid-October (first frost). You can plant a second garden no later than the last week in June for short maturation crops. A June 1 planting in Zone 7 will give you enough time to enjoy a sizeable second harvest.

The growing season for Zone 8 is from March 21 - 31 (last frost) to October 11 - 20 (first frost). The first frost occurs between October 11 and October 20. You can plant vegetables as late as the second week in July for a short harvest time frame.

The grow season for Zone 9 is almost continuous. The only time frame you need to be concerned about is less than two weeks in January when the first and last frosts occur.

You should check to see what the normal temperatures are during the last weeks of the growing season. For example, a season going into September and early October will have lower night temperatures. Some summer crops don't fair well in a cooler climate.

While you can plant a late planting to the first frost date, it's always best to allow as much growing time as possible. If you missed the spring planting, then calculate which vegetables you can grow now and still have a harvest before the first frost.

1
Comments
© 2006-2020 LoveToKnow, Corp., except where otherwise noted. All Rights Reserved.
When Is It Too Late to Plant a Garden?