The average person may know very little about the life cycle of flowering plants, even though flowers have been used as symbols, medicines, ceremonial aids, and decorations worldwide, and captivated even the hardest of hearts with their beauty. Various parts of flowering plants are also used as food. If you're starting a garden or curious about where the food or flowers on your table come from, this information will be helpful and interesting.

To view and print the entire life cycle above, use a PDF program like Adobe Reader. Match the corresponding image in each section, like the vegetative section, to its position in the entire cycle. In the first half of a flowering plant's life cycle, a seed grows into a pre-flowering plant.

Seeds come in various shapes and can range in size from nearly invisible (in the case of tropical orchids) to quite large (like avocados or coconut palms). Every seed contains an embryo, or a miniature version of the plant, ready to sprout and grow when conditions are right. In addition to the embryo, seeds also contain food for the plant to begin its journey, the beginnings of a root structure, and a protective outer shell called the seed coat.

Some seeds, such as the lotus, can lie dormant for many years and still sprout when conditions are right. Others, like some annual grasses, must sprout within a few weeks. 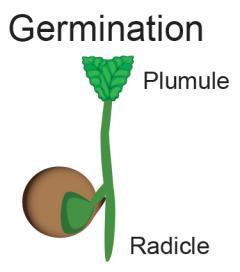 When conditions are right, the seeds germinates, which means it begins to grow. While different seeds require different conditions to germinate, seeds generally require water and warmth. Some seeds also require light, others must go through fire or even the digestive tract of an animal to begin their germination.

Germination begins when, under the right conditions, the seed absorbs water and swells, breaking the seed coat. It then grows a tiny root called a radicle which anchors the plant and absorbs water. With this in place, it sends a shoot (plumule) that eventually sprouts above ground. When this happens, it is called a seedling. 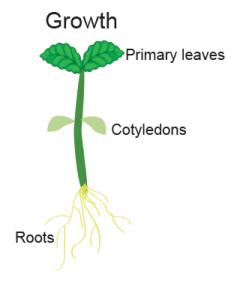 The first leaves of the seedling are called cotyledons. These are actually not proper leaves, but nutrient stores that were present in the seed with the embryo. These nourish the plant as it develops the capacity to harvest nutrients from its environment. Some plants, called monocotyledon, have only one cotyledon while others, called dicotyledons, have two.

The plant then begins to develop its first proper leaves, called primary leaves. These leaves start the process of photosynthesis, or turning the energy from sunlight, water, and carbon dioxide into sugars which the plant uses for food. The plant does this by using chemicals called chloroplasts.

Many plants continue to grow upwards and form new leaves at the top of the stem (meristem), as well as downwards, growing more root hairs. This growth increases the amount of nutrients it is able to gather and helps it withstand weather, disturbance from animals, and competition from other plants.

In the reproductive stage of life, the plant flowers, is fertilized, and produces seeds. 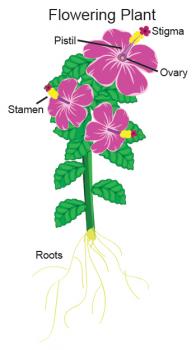 In the beginning of the reproductive stage, the plant grows a small bud. Inside the bud, a tiny flower begins to form, protected by the surrounding sepals. Eventually, the bud opens to reveal a mature flower which is the reproductive part of the plant. Flowers usually have brightly colored petals or strong scents to attract pollinators.

The male part of the flower is called the stamen, and the female part is called the pistil. Some plants have both parts in the same flower, while others have only a male or female part per flower. The stamen carries pollen on the anther, a tiny pouch, which is supported by long filaments. The pistil has three parts: 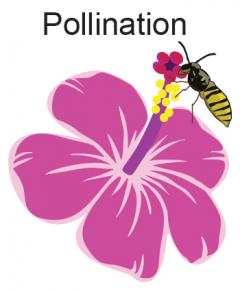 Pollination occurs when the pollen from the male anther is transported to the female stigma. Some plants can self-pollinate. Others require insects, wind, rain, birds, and other natural processes to transport the pollen.

Plants can also cross-pollinate, which means pollen from one plant is taken to another plant of the same species. This is beneficial because it creates genetic diversity, which makes the subsequent generations stronger and more adaptable. Insects like bees play an important role in pollination, pollinating plants as they collect pollen for their food. 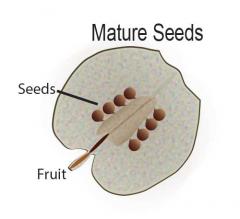 After pollination, the seeds become reproductively viable. A protective layer, called the fruit, forms around the seeds. Some fruits are large and fleshy like an apple, others are dry like the white parachute of a dandelion.

Seeds can be dispersed in diverse ways.

The goal of all plants is to create new viable offspring through seed dispersal. Once the seed arrives at a place where it can germinate, the life cycle is ready to begin again.

While the general process may be similar, some flowering plants do reproduce via other methods.