Algae, in one form or other, are present in all ponds. Green-tinted water, a slimy layer covering the rocks and plants in the pond, green scum on the water surface, and submerged or floating masses of hair-like structures, are all algal growths. They are part of a healthy aquatic ecosystem and provide food for fish and other aquatic life.

Unicellular algae such as Chlorella and Chlamydomonas are responsible for coloring the pond water green. They are microscopic, free-floating, algal cells capable of photosynthesis. The first type of algae to grow in a new pond, they help in the growth of tiny zooplankton, which can be a food source for fish and other aquatic animals when they are eventually introduced.

Multicellular algae like Cladophora and Pithophora are filamentous and appear hair-like; they may grow attached to the stones and plants in the pond or may float freely. More often found in the shallow waters at the edges of the pond, or hanging from waterfalls, their aesthetic appeal is a highly subjective matter. However, they do offer a safe home to zooplankton, small fish, and their young ones.

Slimy mats covering the surfaces of rocks and the leaves of aquatic plants are referred to as blue-green algae, but they are colonies of cyanobacteria. These photosynthetic bacteria are credited with oxygenating the earth, but they also produce toxic substances, and are responsible for large-scale algal blooms in lakes and oceans. A few blue-green algae such as Anabaena are used in agriculture, but, as a general rule, they cause skin irritation, and even food poisoning if ingested. They are best avoided in ponds that stock fish.

Unicellular, planktonic algae and the filamentous types are beneficial in small quantities. However, when they grow prolifically, it becomes a problem. The unicellular algae can bloom to such an extent that the pond water may appear like green pea soup. The filamentous algae can get detached and practically cover most of the water surface. Even though algae produce oxygen during the day, they compete with fish for oxygen at night.

In addition to being unsightly and reducing visibility, they can destroy submerged plants by blocking sunlight. Dead and decaying organic matter in the pond can deteriorate the water quality and jeopardize the lives of aquatic animals. That is why algal blooms are often followed by fish kill.

Excess growth is an issue anyone with a pond needs to consider. Beyond controlling the excess growth, algae does not need extra care. Control it by doing the following: 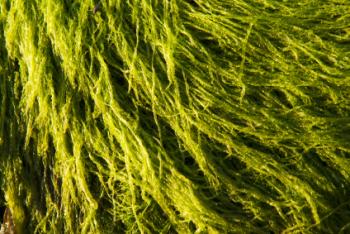 Algaecides may be used to destroy pond algae, but they can be harmful to other aquatic plants animals. A backlash of resistant strains of algae is another possibility. Additionally, antibiotics, though effective against cyanobacteria, are no longer recommended for the same reason.

Try to avoid excess growth by avoiding these conditions:

Algae are photosynthetic; hence they grow and multiply faster in abundant sunlight. Constructing the ponds in a shady place or making them deeper than two feet reduces algal growth. Growing marginal plants, like cattails to cast a shadow over the edge or floating plants like water lettuce covering one third or more of the pond surface, cuts down the sunlight reaching the bottom.

Water run-off from flower beds and lawns can increase the nitrates and phosphates in the pond. Growing submerged aquatic plants like Anacharis and Cabomba can remedy this, as they will compete with the algae for the same nutrients. Introducing nitrating bacteria is also ideal.

Overpopulation of fish means more nitrogenous waste and increased carbon dioxide concentration in the water, both ideal conditions for algal bloom. One goldfish for 100 gallons of water or a Koi fish for 500 gallons is best. The thumb rule is that from head to tail, there should be just enough fish to reach across the widest part of the pond.

Dead leaves, fish waste, and algal matter form a thick muck at the bottom of the pond, another source of nitrogen and carbon dioxide. Avoiding a mud bottom and regular vacuuming can keep the pond clean. Use a net over the pond if falling leaves are a problem.

Lack of water movement encourages algal growth. Agitation of the pond water with aerating devices, waterfalls and fountains keep the algal growth in control. This is especially important in keeping down the harmful cyanobacteria or blue-green algae.

If you have a small water feature or pond in your home landscape, it is important not to let the first sign of algae overwhelm you. With proper care and maintenance you can control the algae quite nicely. Choose a control measure that suits you best depending on the severity of your algae problem and the size and scope of your water feature. Smaller water features may do just fine with hand picking of a couple of fish that will eat the algae. Larger ponds often require a more aggressive approaches. However, the key with algae is to not let it fester; the sooner you deal with it, the better. If you have not set up your water feature, be sure to think about algae control methods before you do.