Lotus (Nelumbo nucifera) is an emergent pond plant that grows with its roots in the soil at the bottom of the water feature and its leaves and flowers on the surface of the water. It is originally from the tropical areas of Asia. It is the national flower of India and Vietnam.

The lotus, often erroneously referred to as a water lily, comes in a variety of shades from white to bright pink. The plant has two round shaped leaves that float on the water. The flower is on a stalk above the leaves. Lotus range in size from tiny to large, with the largest ones having leaves measuring 60 cm in diameter.

This plant is used as an ornamental plant in water gardens and ponds. The flowers, seeds, young leaves, and roots are all edible. The distinctive seeds, which look like the head of a watering can, are widely sold as decorations. 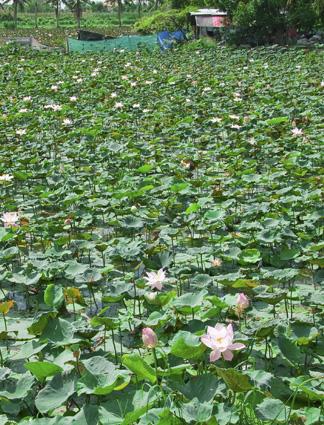 The lotus plant is an aquatic perennial that does best in full sun. It requires dirt at the bottom of the water feature to grow its roots in, so is not a good choice for a bird bath or other cement water feature.

The water to grow your lotus must be non-chlorinated and warm. Lotus prefer still water to moving water. The water must be deep enough to cover the rhizome and allow room for the lotus to float above the mud in the bottom of the water feature.

To grow a lotus flower from seed, first soak the seeds in a container of warm water. If the seeds float, discard them as they are probably not fertile. The seeds that sink are fertile. Change the water every day in the container.

When the seeds sprout, place them in a small pot filled with garden soil. Cover the seeds but let the sprout remain above the soil line. Place the pot in about two inches of warm water to keep the seed hydrated properly. When the water temperature outside is at least 60 degrees F, plant the sprout in a larger pot without drainage holes and set it in the mud at the bottom of the pond. You can plant the plant directly in the mud, but lotus will spread to cover the surface of the water feature if you do that. Lotus started from seed will probably not bloom the first year.

The easiest way to grow a lotus plant is to plant the rhizome directly in the soil at the bottom of your water feature. However, the lotus will spread so you can plant it in a large container with no holes in it and set that container in the mud to keep the plant from taking over the water feature.

Lotus plants should be fertilized sparingly the first year, with pond tabs stuck in the pot or beside the rhizome in the mud. After the first year, lotus may be fertilized every three to four weeks during the growing season with pond tabs. Use two pond tabs for small lotus and four pond tabs for large lotus plants. In the fall, cut off the yellowed foliage above water level, leaving just the root of the lotus. Make sure the water level of the water feature is high enough to prevent the water from freezing down to the roots of the lotus.

Aphids and caterpillars are problems for lotus flowers. Use a powder that is designed to be used with water features to treat these pests. Liquid pesticides will burn the leaves and pollute your water feature. This is especially important if you have koi or other fish in your water feature.

The lotus is sacred to many Asian religions. It has long been used as a symbol of sexual purity and non-attachment. The Buddha is often pictured holding or sitting on a lotus flower. Hindu Gods are also often pictured sitting or standing on lotus flowers.

Lotus are beautiful and sacred flowers. They make a nice addition to any water feature with a dirt bottom and still water. Plant your sacred lotus today and enjoy its blooms all summer.