Cattail (Typha spp.) is a large grass-like aquatic plant that is found in almost every corner of the globe. It is of immense importance to wildlife, water quality and traditional cultures - and it can even be used for landscaping purposes.

Cattail in the Environment 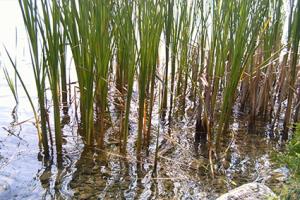 Cattail is ubiquitous in natural wetland environments, but it will grow almost anywhere with ample moisture and sun. It thrives in six to eight inches of water, but will grow without standing water, as long as the soil is stays constantly wet. The margins of rivers, streams and lakes are all places that cattail is found, as well as roadside ditches, irrigation canals, and farm ponds.

Growing four to eight feet in height with one-inch wide leaves that taper to a rounded point at the top, cattail differs from most other large grass-like wetland species (like rushes and reeds) in that the foliage is flat, rather than round.

The characteristic seedhead also makes cattail easy to identify. It emerges from the foliage in midsummer about the size and shape of a hotdog. It is green at first, but ripens to a deep brown color in fall and becomes soft and velvety to the touch.

By the end of fall, the immense quantity of seeds in each seedhead begin to separate from the stalk, appearing as a cottony substance that drifts away on the wind.

Cattail leaves turn brown in winter, but often remain standing until the following spring when the bright green shoots emerge again from the underwater root system.

Wetlands act as water filters in the watersheds where they occur and, as one of the most abundant wetland species, cattail has an important role to play in providing this essential ecological service. 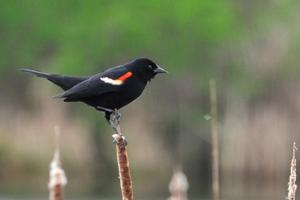 Cattail forms extensive stands in wet places, creating habitat for a wide range of species from bird life to aquatic species, such as muskrats, red-wing blackbirds, and many frog and amphibian species. Many wetland species also eat various parts of the plant and use it to build their nests.

Cattail in the Home Landscape

Cattails have a slender, graceful appearance that can be an asset in the garden if used appropriately. Because of their size, cattails are primarily suited to large water gardens, where they make a dramatic statement and can be used as a green backdrop for smaller aquatic plants. 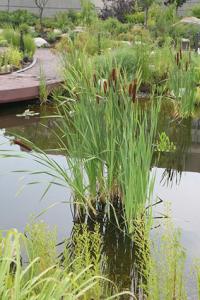 There is a smaller species of cattail that is often available in garden centers with the aquatic plants, called narrowleaf cattail (Typha angustifolia). This species grows to a mximum of four feet in height and is known for its graceful half-inch wide leaves. This species and all other cattails are hardy in USDA zones 3-11.

Beside looking for cattails at your local garden center, you may also consider transplanting a few rhizomes from a nearby wetland. This is often the easiest way to obtain plant material.

Cattails are generally planted in large pots which should be weighted down with bricks at the bottom to keep them from floating. Submerge them in a few inches of water and divide the roots every few years.

They are not bothered by pests of disease and the only maintenance is to cut down the stalks in early spring before new growth emerges. The cottony seedheads provice winter interest in the garden, as well as a food source for birds.

Cattails can also be used to landscape natural water features, for those lucky enough to have one in their home landscape. However, exercise caution when planting cattail in these circumstances, as it spreads agressively and will colonize large areas if there is suitable habitat and is nearly impossible to eradicate once established.

Cattail has been a plant of many uses by traditional cultural groups wherever it is found.

The roots can be harvested at any time of year, while the other edible portions are only good to eat when they are young and tender - in early spring for the shoots and in early summer for the seedheads. If harvesting the foliage for craft purposes, it's best to wait until it has grown to its full size in summer for the maximum strength of the material.

Cattail has more uses and environmental benefits than most plants. Though its uses in the garden are relatively minor, it's a wonderful wild species to become acquanited with.