If you plant a peach or other fruit tree seed, the tree that comes up will not produce the same type of fruit that the seed was from. The only way to produce a fruit tree that will produce the same fruit as the original tree is through grafting. Grafting refers to any of several methods of attaching a section of a stem with leaf buds into the stock of an existing tree.

Young, vigorous fruit trees less than five years old are the best for grafting. You want a rootstock, or the tree the graft is going into, to be vigorous and as disease resistant as possible. The quality of its fruit is not important; it is the quality of the tree that is the important part. The trees should be tall enough that the tree will have 1 to 2 feet between the trunk and the graft.

Scions are the pieces of wood with three or four buds on them that will be grafted onto the rootstock. The best time to harvest scions is in the winter. Harvest pieces that are 1/4 to 3/8 inches in diameter and that have three or four buds on them. Store them in your refrigerator with the cut ends wrapped in a damp paper towel and the entire scion in a plastic bag. These will store three to four months and still be good for grafting. Do not store in the freezer.

Be sure to label which type of tree each scion is from. The scion and rootstock need to be the same type of fruit tree. You cannot graft a pear scion on an apple tree, for example.

It is best to graft in the spring, when the buds of the rootstock are just starting to open. You can graft until blossom time, however.

All grafts should be covered as soon as they are made. Electrician's tape may be used to bind the two pieces together. The good brands will stick to themselves and last through the first summer, when they are no longer needed.

Asphalt water emulsion compound is widely used as a protective coating on graphing unions. It is of a pasty consistency, and should be put on with a small paddle or tongue depressor so you can apply it thickly.

You will need the following tools to graft your trees:

There are four general methods of grafting fruit trees. These methods are used with different species of trees and in different situations. Trees up to five years old can be grafted all at one time. Older trees need to be grafted one branch at a time with a year or so between grafts. Make sure that when you graft the scion to the rootstock, that the scion is right side up. You can tell because the buds point up.

Budding uses a single bud as the scion rather than a stick. It is the grafting method of choice for cherry, plum, apricot, and peach trees, and can be used for apple and pear trees.

Budding is done later than other types of grafting, in the summer. This is when the bark slips easily and there are well grown buds to use in the grafting. It is the easiest method of grafting for beginners.

1. Cut bud sticks from strong shoots of the present season's growth with mature buds that are slightly brownish in color.

2. Clip off the leaves from the bud sticks, leaving 1/2 inch of the leafstalk for a handle.

3. Discard the soft tips of the bud sticks.

4. Choose branches from the rootstock that are the size of a lead pencil up to 1/2 inch diameter. Larger branches have too thick a bark for this method to work.

5. On the rootstock, about 15 or more inches from the trunk, make a T cut across the bark.

6. With a knife blade, lift the corners and carefully loosen the bark.

7. Cut a bud from the bud stick which includes a thin piece of attached wood.

8. Slide the bud under the flaps of the bark on the rootstock until the ends are firmly under the bark. 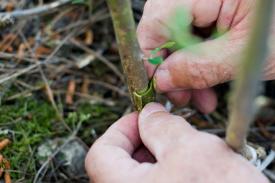 9. Using electrician's tape, tie the bud to the rootstock.

10. Wrap the ends tightly, but be sure not to cover the bud with tape.

11. In two to three weeks, cut the tie so you will not girdle the graft.

12. The next year, cut the rootstock off above the graft when the bud starts growing.

13. Remove any shoots below the graft.

14. The second year, remove all growth from the tree except the bud grafted shoots.

The whip graft is usually used on small apple and pear trees. The diameter of both the rootstock and the scion should be about the same size, not more than 1/2 inch in diameter.

1. Cut a branch off the rootstock, leaving a stub of at least 1 foot.

2. Cut a straight, vertical 1-1/2 inch cut on the bottom end of the scion and the top end of the rootstock.

3. Then carefully cut a slit down the middle of the scion cut, leaving a tongue about 1 inch long attached to the scion. 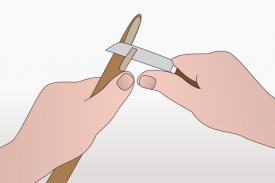 4. Do the same to the rootstock.

5. Fit the scion and rootstock together interlocking the tongues so that the cambium, or inner bark, of both is in contact. 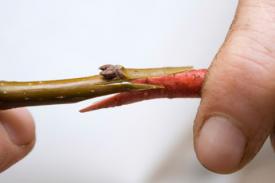 6. Cover the graft with electrical tape to hold the two pieces together. Do not stretch the tape too much or it will be too tight.

8. Remove the asphalt and tape as soon as the scion has begun to grow to prevent girdling of the graft.

This type of graft is difficult for the beginner to do well.

The cleft graft is used when grafting onto an older apple or pear tree. The tree trunk or branch being grafted to should be about 1 to 2 inches in diameter. The graft should be made within a foot of the trunk or main branch and preferably not more than 4 to 6 feet off the ground. Otherwise the top will be too tall to easily pick.

1. Cut off the branch or trunk of the rootstock where the graft will go.

2. Cut the cleft in the middle of the top of the rootstock with a cleft chisel. You can also use a large knife or hatchet. Do not split the branch or trunk. Cut it deep enough to fit the end of the scion in it, about 1-1/2 inches. 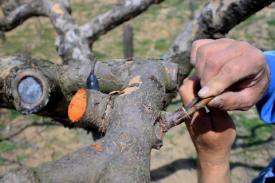 3. Cut the bottom of the scion to a wedge shape. Making a sharp point will tend to break off when inserted.

4. Insert two scions in the wedge of the rootstock, one on each edge of the trunk or branch. You will need to open the cleft with a grafting tool or screwdriver to insert the scions. 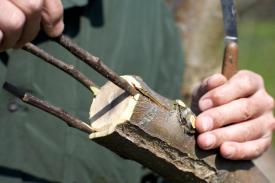 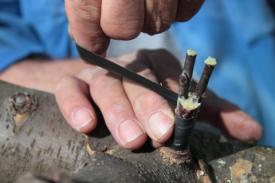 7. Cover the graft and the length of the cleft with asphalt grafting compound. 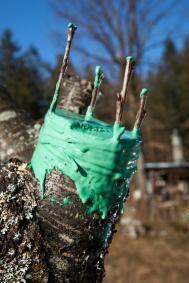 8. When the scions start growing, tie to a support stake to prevent breakage.

9. Tie all the branches coming from the scion together with a piece of string to stabilize them.

10. The first year, let all scions and the branches below them grow.

11. The second year, chose one scion as the main branch and cut the rest to three buds. Remove all branches below the graft.

12. The third year, cut the spare scions back to three buds again. Continue to remove any branches below the graft.

13. The fourth year, cut the spare scions off. Continue to remove any branches below the graft.

The side graft is generally used for trees that are too big for the whip graft but not big enough for the cleft graft. The scion is inserted in the side of the rootstock, then the rootstock above the graft is cut off when the scion starts growing.

1. Find a smooth place on the underside of a branch at least a foot from the trunk. Make a slanting cut almost to the core of the branch.

2. Cut the scion to a short, sharp wedge with one side longer than the other.

3. Bend the branch a little to open the cut and insert the scion. Make sure the cambium of both branch and scion meet.

5. Wait two weeks, then cut the rootstock above the graft off.

6. Cover the cut with grafting compound.

7. After the first season, cut all growth off below the graft.

8. Fire blight is a disease that attacks fruit trees. If the scion is attacked by fire blight, cut it back six inches below the fire blight symptoms.

There are several reasons for graft failure. These are the most common:

If some of the grafts fail, do not worry. One hundred percent success is almost unheard of. Usually, you graft more scions than are needed for the tree to succeed. Let the shoots where the graft failed grow and bud them that summer, or let them grow a year and try another graft. Just do not let them grow so much they shade other scions.

Grafting fruit trees allows you to put exactly the scion on the rootstock that you want. This means you will get exactly the kind of fruit you want from that fruit tree. While grafting is a bit of trouble, you should get years of enjoyment from the resulting tree.