Aquaponics combines aquaculture, the raising of edible fish, with hydroponics, a method of growing plants in a soilless medium. It is one the most efficient and sustainable approaches to food production capable of producing hundreds of pounds of healthy, low-fat protein and organic vegetables in an area the size of a small room. 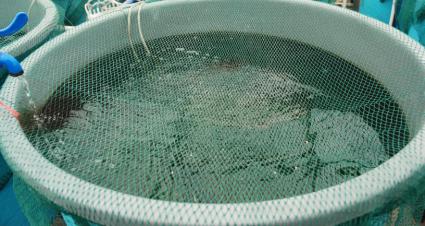 Aquaponics systems are modeled on natural aquatic systems, where the waste products of the fish are the source of nutrients for the plants, which in turn purify the water for the fish. It is a model of self-sufficient food production, as it requires little in the way of external inputs and lessens reliance on large-scale unsustainable food systems.

Aquaponics is a lot more involved than a typical vegetable garden, but it is a worthwhile project within reach of any motivated homesteader. You can try your own DIY system or work with a ready-made kit. The key is to keep your system as small and simple as possible until you master the basic techniques. 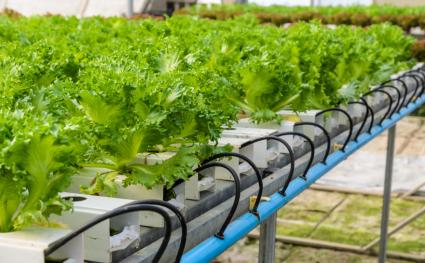 Aquaponics systems are often incorporated into greenhouses in order to keep them going year round. They can even be used indoors under artificial lighting. There are pro and cons for each approach.

Because indoor systems produce food continuously in any climate, they are inherently more productive than outdoor systems. However, building a greenhouse or setting up an artificial lighting system adds a great deal of complexity and expense to an aquaponics system, not to mention the cost of heating the greenhouse.

In mild winter climates, fish and vegetables can be produced all year outdoors, but in temperate climates the system generally has to be shut down for winter. This is potentially a big issue if the fish have not yet reached a harvestable size, though some species are able to overwinter.

Some people choose to have a very small system indoors for breeding fingerlings in the winter that are then released into the outdoor tank once the water has warmed sufficiently. 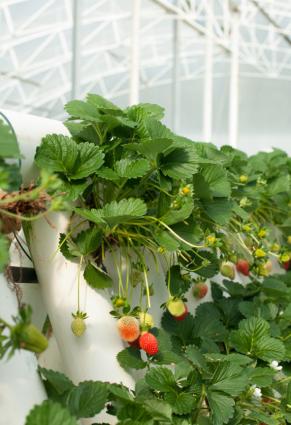 All aquaponics systems have certain features in common although the exact materials used can vary significantly depending on the approach.

Many vegetables grow perfectly well without soil, as long as nutrients are provided in an aqueous solution. This is the basis of hydroponics, which is one half of the equation in an aquaponics system. Perlite, vermiculite, sand, fine gravel, coco coir and many other inert growing mediums are available. You can make your own recipe with some of these ingredients or make use of a commercially available hydroponic growing medium.

The options for containers to hold the growing medium are equally diverse. Ordinary plastic pots are the simplest DIY approach; at the other end of the spectrum are things like hydroponic towers that allow increased productivity by making use of vertical space. In between are a myriad of products from floating rafts to simple plastic growing boxes.

One popular approach is to build rectangular wooden boxes just like those used for ordinary raised bed vegetable gardens. These are then lined with pond liner and filled with fine gravel or some other free-draining growing medium. 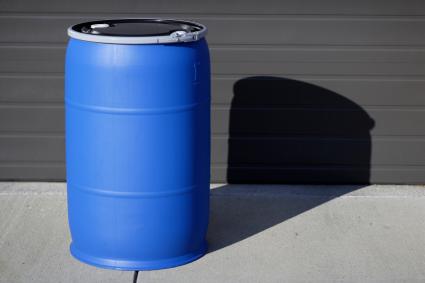 An ordinary 55-gallon drum or a square 225-gallon bin are easy, inexpensive options for an aquaponic fish tank. Many people have used aboveground swimming pools for larger backyard systems. Specialty suppliers offer heavy duty plastic tanks or you can improvise your own system using pond liner in a raised wooden structure or set into the ground.

If you're considering recycled plastic bins for your tank, make sure they were used for food products or other non-toxic materials and clean them thoroughly before adding water and fish.

Professional aquaponics systems can be high-tech and quite complex. Still, the backyard gardener needs a lot more than just a fish tank and growing beds.

First off, a pump is necessary to move water between the tank and growing area. A standard fountain pump sold for backyard water features is generally sufficient.

Second, and equally critical, is an aerating device to maintain oxygen level for the fish. This is a mission critical component - if it stops running for even a few hours, a fish kill may occur. This can take the form of a bubbler device that sits at the bottom of the tank or agitators that swish the water around on the surface to add oxygen.

You will also need a system to distribute the water from the fish tank to the vegetables (unless floating beds are used). Again, there are numerous products designed for this purpose, though many backyard growers simply drill 1/4-inch holes every six or eight inches in pieces of 1/2-inch PVC pipe as a rudimentary drip system to deliver the water. In the raised wooden box system described above, the PVC pipes would be laid parallel to each other about 12 inches apart. A seedling can be planted at each of the drip holes in the PVC pipe. 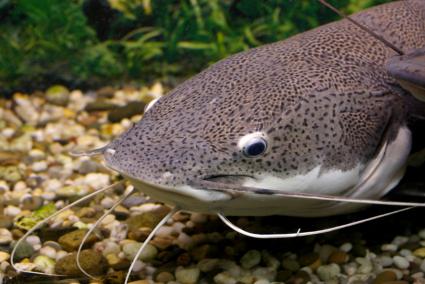 The species you choose depends on whether your system will be kept outdoors or indoors.

Catfish are a reliable choice for a recirculating aquaculture system and are the top species used in systems that are allowed to overwinter. As long as a small area on the surface is kept free of ice wit an agitator, catfish will survive the winter in a semi-dormant state just as they do in nature. Once the water temperature hits 70 degrees in spring, they will wake up and start feeding again.

Tilapia are the most widely farmed fish in the world and are perfectly adapted to aquaponics systems. The only disadvantage is their inability to survive cold weather. They are a tropical species and will die if the water temperature dips below 50 degrees. The water needs to be at least 70 degrees for them to thrive and reproduce. It is possible to grow them out to a harvestable one-pound size in a six-month period of warm weather from April to September, though there is no guarantee they will grow that fast, especially for a beginner. For this reason tilapia are typically used in greenhouse systems.

Yellow perch are another species used in aquaponics systems that are known for their excellent culinary qualities, as well as their ability to grow in cool waters.

Lettuce, kale, arugula, spinach and other leafy greens are by far the easiest crops to grow in an aquaponic system along with herbs like basil and dill. Essentially, anything harvested in the leaf stage, as opposed to a fruit, does well with the mix of nutrients contained in fish waste. Tomatoes, peppers, cucumber and strawberries are commonly grown in hydroponic systems as well, but they need nutritional supplements to produce a crop.

Full sun, flat ground and easy access to a water supply are the three main requisites when choosing a site for an aquaponics system. There are many possible configurations depending on the chosen approach.

One of the main decisions is whether to have the grow beds higher in elevation than the tank or vice versa. The lightweight growing medium makes it possible to elevate the grow beds above the tank on a table if desired. For this method, a system of piping has to be devised to collect the water and funnel it back to the tank. In this case the pump will be in the bottom of the tank. If the beds are on the ground, however, a second pump is needed to return the water that drains from them to the fish tank. 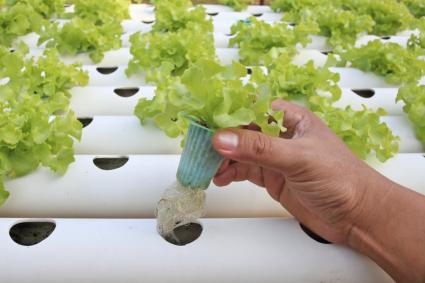 Another big question in designing an aquaponics system is the ratio of growing space to tank space. In general, the more growing space the better, as it it's actually the growing medium, not the plants, that do most of the filtering. A good rule of thumb is to plan for the growing surface to be at least two times the surface of area of the tank.

Aquaponics systems can be stocked at up to one fish per gallon of water, making them incredibly efficient at food production. It's recommended that beginners start with one fish per 10 gallons of water while learning the ropes of aquaculture, but that's still a lot of fish that can be grown in a very small space. With the veggies you'll harvest from the growing beds, your family will have the freshest food imaginable.